The first match will begin on August 18, while the second will kick off on August 25.

Krishnagiri (Kerala): India ‘A’ cricket team is all set to clash with South Africa ‘A’ for two four-day matches at the Krishnagiri Stadium here in Kerala amid lush green surroundings, starting from Tuesday. The first match will begin on August 18, while the second will kick off on August 25, Kerala Cricket Association (KCA) president T.C. Mathew told IANS. Mathew said the pitch was expected to assist fast bowlers. “We can accommodate about 7,000 spectators and the entry is free for both the matches,” he said. BCCI ad-hoc committee to visit Patna on Tuesday

The ground is located about 900 metres above sea level, second in the country after the ground at Dharamsala in Himachal Pradesh at this height. Built by the KCA at a cost of Rs.10 crore, the table top cricket ground is one of the most scenic in the country, with mountains on three sides. Located at a stone’s throw from the National Highway to Mysore, the ground is located on an 11-acre land and has a 20,000 square feet pavilion. It is only three-hour drive from Mysore. The Indian team will be led by Ambati Rayadu and the visitors by Dane Vilas. Anurag Thakur to Pakistan: Cricket and terrorism cannot co-exist 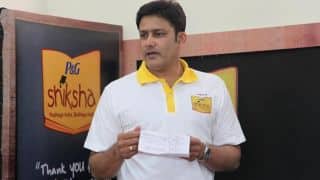