Ireland have come a long way since last year's ICC World Cup and middle-order batsman Kevin O'Brien hopes the country continues to build on the gains it derived from the cricketing extravaganza in the Indian sub-continent. 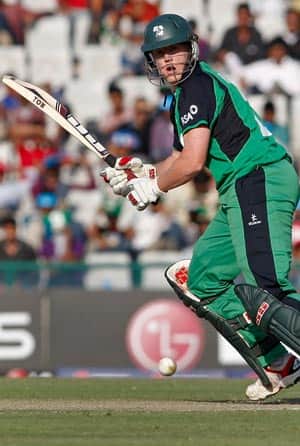 Ireland have come a long way since last year’s ICC World Cup and middle-order batsman Kevin O’Brien hopes the country continues to build on the gains it derived from the cricketing extravaganza in the Indian sub-continent.

It was on the same day last year that O’Brien slammed a breathtaking 113 off 63 balls to turn the tables on England at Bangalore’s Chinnaswamy stadium.

That giant-killing feat notwithstanding, O’Brien believed Ireland still have a long way to go.

“That match brings back great memories. It is simply brilliant. When I look back at that game it was a great day for Irish cricket and for me personally,” O’Brien recalled.

“I got a contract with Gloucestershire thereafter. I was also nominated for a few awards back home and my profile was raised in India. So it was great for me in every sense,” he said.

O’Brien struck 13 boundaries and six sixes en route to his 113 as Ireland chased 327. It was also Ireland’s first victory over their neighbours.

The batsman along with the rest of the Ireland squad is currently preparing at Port Elizabeth, South Africa, for the ICC World Twenty20 Qualifier, scheduled to be held in the United Arab Emirates from 13-24 March.

Ireland are placed in Group B of the 16-team tournament alongside Kenya, Scotland, Namibia, Uganda, Oman, Italy and USA.

Only two teams can qualify for the main event, scheduled to be held in Sri Lanka from September 18.

“It is a big tournament and a very difficult competition since only two teams can qualify. The boys are full of confidence. We are at our best when we are enjoying ourselves.

We are confident of our abilities and back ourselves to win the tournament,” the all-rounder said.

The Ireland squad is expected to be in Port Elizabeth till March 8.

“We have been training hard for the last few days during both morning and afternoon. We have at least four-five days of training to do before we head to UAE. It has been a good exercise. Now we need to start the tournament well,” he reckoned.

Ireland had qualified for the 2010 Twenty20 World Cup in the West Indies through the last qualifier held in UAE.

O’Brien, who will turn 28 on March 4, believes his country has come a long way since the last T20 World Cup mainly because of the fact that the squad has gained a lot from exposure and experience.

“Most of our boys have gained experience playing twenty20 cricket in England. We are generally more experienced than the last time. We know our game well now,” O’Brien said.

Ireland’s biggest strength, according to O’Brien, is the presence of a number of seam bowling all-rounders.

O’Brien, meanwhile, revealed that his team kept a close tab on the just-concluded series between Pakistan and England.

“We had one eye on the series (Pakistan v England). The scores have not been high with 140 proving to be a winning total. Even during the last ICC World Twenty20 qualifier in 2010, 140 was a winning score in Dubai, maybe Abu Dhabi affords a bit more. So we will have to get as many runs as we can to qualify,” the all-rounder concluded. (PTI)