Kevin Pietersen back in England nets ahead of his return

Kevin Pietersen back in England nets ahead of his return

Kevin Pietersen returned to the England ranks on Wednesday with a specially organised practice session. 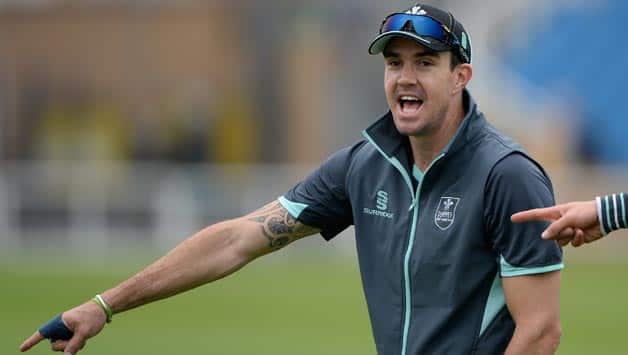 Kevin Pietersen returned to the England ranks on Wednesday with a specially organised practice session.

The South Africa-born batsman has been out of England action with a knee injury that forced his early exit from the tour of New Zealand in March and was sidelined from all cricket until making a superb unbeaten 177 for Surrey in a County Championship match last weekend.

In his absence England have played return home Test and one-day series against New Zealand while, still without arguably their best batsman, they suffered a five-run loss to India in the Champions Trophy final at Edgbaston on Sunday — a defeat that meant they’d still to win a major one-day international title.

Pietersen was also not included in the England side that lost the first of two Twenty20 internationals against New Zealand at The Oval, Surrey’s home ground, by five runs on Tuesday.

However, the 32-year-old was at the London venue for a 20-minute net session on Wednesday supervised by England spin bowling coach Mushtaq Ahmed and is expected to play against the Black Caps in Thursday’s series finale.

Pietersen has also been included for England’s Ashes warm-up match against Essex which starts on Sunday, with the first Test against Australia starting at Trent Bridge on July 10.

One plus point for the home side from Tuesday’s loss was the form of towering seamer Boyd Rankin, making his England debut in all formats for his adopted country following 52 one-day internationals for his native Ireland.

The 6ft 8in Rankin needed just four balls to take his first England wicket on Tuesday and finished with admirable figures of one for 24 in his maximum four overs during a contest dominated by batsmen on both sides.

“Yes, I was pretty happy,” the Warwickshire paceman said.

“I was quite nervous for the first few balls but then settled down when I got that wicket.”

“It was a good pitch. I tried to do what I normally do, hit back of a length, and keep calm under pressure.”

“There was that short boundary but I was trying not to think about that. I was just concentrating on what I normally do.”

“I was pretty happy with my figures but it was a shame we couldn’t get over the line.”