John Buchanan believes that 'selfish' Kevin Pietersen could tear apart the fabric of the England team.

London: Former Australian cricket team coach John Buchanan believes that ‘selfish’ Kevin Pietersen could tear apart the fabric of the England team after the sacked batsman was given encouragement by new ECB chief Colin Graves for a possible return to international cricket. Pietersen, sacked in February 2014, has joined Surrey in a bid to win back his England place after encouragement from new England and Wales Cricket Board (ECB) chief Colin Graves. But Buchanan believes the batsman’s return could be destructive.

Buchanan said that a decision was made for good reasons, adding that leadership is about sticking by that decision, the BBC reported. Pietersen was told his England career was over last year when ECB managing director Paul Downton accused him of becoming disengaged from the team. But incoming chairman Graves said the selectors could not ignore Pietersen if he scored runs in county cricket, prompting the player to cut down his Indian Premier League 2015 (IPL)commitments and rejoin Surrey for the start of the season in April. Kevin Pietersen to opt out of IPL 2015

Buchanan, who won three Ashes and two World Cups as Australia coach from 1999 to 2007, believes the mixed messages from the ECB could have a detrimental effect on the England team. He said that various things have torn at the fabric of the England team and that has certainly been one of them. Buchanan said that there has been a clear decision made by the ECB about where Pietersen fits in the English camp, asking them to let them stick by the decision, draw that line in the sand and say that this is what they really stand for. Jonathan Trott returns to England squad

Buchanan claimed that one would always have people like Pietersen that are game changers and they are usually difficult to handle because they are quite selfish, adding that when things are going well for them, there are no better people in the team, they are caring, sharing and give a lot of support to everyone, but when things are not going well they become quite destructive. The former coach said that players like Pietersen can tear things apart.  Ottis Gibson reappointed England bowling coach for West Indies series 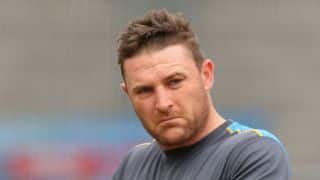 The mood in New Zealand: “Make my child, the next Brendon McCullum”