Kevin Pietersen: I still don't know why I'm not playing for England

Kevin Pietersen: I still don't know why I'm not playing for England

Pietersen also claimed that Flower had an issue with him throughout his five-year tenure as coach.

Kevin Pietersen on Tuesday accused the England and Wales Cricket Board (ECB) of deliberately undermining him and alleged that former England coach Andy Flower had a personal vendetta against him. A day after his new autobiography was released to the press, former England batsman Pietersen continued his assault on the English cricket authorities in a series of media interviews.

The outspoken 34-year-old, whose book claims that there was a culture of “bullying” within the England team, told the Radio Times magazine that the ECB used underhand tactics to tarnish his public image.

“The way the ECB works is it uses the media to get messages out there. If the ECB could never get at me — because they knew they couldn’t really squash my personality — they would leak story after story to try to get me through the media. But unfortunately, I’ve got incredibly thick skin, and it never worked,” said Pietersen, whose international career was effectively ended by the ECB in February after England’s 5-0 Ashes whitewash in Australia.

Pietersen also claimed that Flower had an issue with him throughout his five-year tenure as coach because the batsman had criticised the former Zimbabwe international’s role during his time as an assistant to Peter Moores.

“I think he (Flower) had it in for me ever since he took over because when I was captain, I didn’t think he was doing the second-in-command job really well,” Pietersen told BBC Radio 4.

“When I said to the ECB to just let me step down as captain and let Peter Moores continue, I gave my views on the coaching structure and I said that I didn’t think Andy Flower was fulfilling his role as the second-in-command properly. And then he got given the number-one job, and it certainly felt — the way that he treated me throughout his coaching reign — that he was looking to try and find ways to get rid of me,” he added.

Pietersen, England’s all-time leading run-scorer, added that he still did not understand why the ECB had decided to axe him.

The ECB has yet to comment on Pietersen’s book, KP: The Autobiography, which is published on Thursday. But former England spinner Graeme Swann, one of the players accused of bullying by Pietersen, has described it as “codswallop” and “the biggest work of fiction since Jules Verne”. 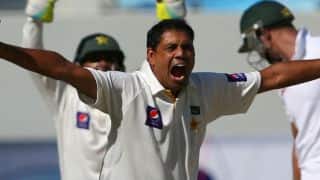