Kevin Pietersen marked his return from injury with an unbeaten 177 for Surrey in their County Championship match away to Yorkshire at Headingley on Sunday. 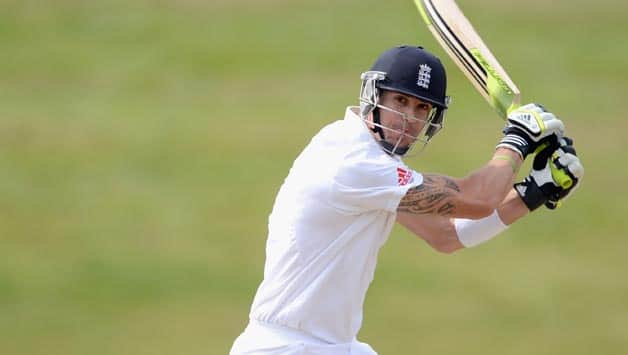 Kevin Pietersen marked his return from injury with an unbeaten 177 for Surrey in their County Championship match away to Yorkshire at Headingley on Sunday.

Pietersen, arguably England’s most talented batsman, had been sidelined with a knee injury since leaving the tour of New Zealand in March and the South Africa-born shotmaker was looking to prove his fitness ahead of the first Ashes Test at Trent Bridge on July 10.

He did so in fine fashion, with his hundred coming off just 106 balls in an innings that eventually featured 17 fours and seven sixes on the third day of a four-day clash in Leeds, northern England.

At the scene of his impressive 149 in a drawn Test against his native South Africa last season and subsquent controversial “it’s tough being me” press conference, Pietersen’s latest Headingley century was the cornerstone of Surrey’s 353 for seven declared in reply to Yorkshiere’s 433 for nine declared.

England managing director Hugh Morris was confident Pietersen would be fit for the start of the defence of the Ashes at Trent Bridge in Nottingham, central England.

“It’s very encouraging that Kevin is back playing again,” Morris told BBC Radio Five’s Sportsweek programme:
“I know he’s worked very hard in practice on preparation and on his fitness. He looks very fit.
“Clearly it’s important that he gets some cricket under his belt before the selectors actually sit down and pick the first Ashes squad.

“We’ve got a few weeks yet and he’s got this four-day game and he’s in our Twenty20 squad for New Zealand and we’ve got a game against Essex leading into the Ashes, so there is some cricket left, which is encouraging.”