Kevin Pietersen should have been sacked by ECB given poor form: Graeme Swann

Kevin Pietersen should have been sacked by ECB given poor form: Graeme Swann

Graeme Swann also cited how Pietersen's form fell away after he scored 15 hundreds.

Graeme Swann the former England spinner reacted to the criticisms by Kevin Pietersen in his controvercial auto biography, about the off- spinner’s sudden retirement during the last Ashes series in Australia. According to Swann, Pietersen’s recently-published book is the “the biggest work of fiction since Jules Verne”.

While speaking at an event in London’s Olympic Park where he announced his intention to drive a Ford Fiesta ST in Wales Rally GB, the British round of the World Rally Championship, Swann also suggested that a lot of bitterness would have been avoided had the England and Wales Cricket Board (ECB) simply sacked Pietersen for straight-out of form reasons rather than the vague explanation they relied on to ditch the South Africa-born batsman.

“There might have been a cleaner way of doing things and there would certainly have been a lot less blood-letting. Martin Crowe, the former New Zealand captain recently described Pietersen as an “insecure kid who never grew up”, arguing his sacking came too late with his form fading as his attention turned to the Indian Premier League in one of his articles.

He also cited how Pietersen’s form fell away after he scored 15 hundreds in his first 45 Tests, when averaging just over 50. “From 2009 on, in his next 59 Tests he scored just eight centuries,” Crowe said, “fell for seven ducks, the average at a modern-day adequate 44, including a mandatory dine-out against Bangladesh, and propped up by six scores above 148. Far too many misses in between for a man in his prime.”

Asked if he agreed with Crowe’s analysis of Pietersen’s decline, Swann said: “You know me, I have never been a stats fan but the stats seem to suggest that.” 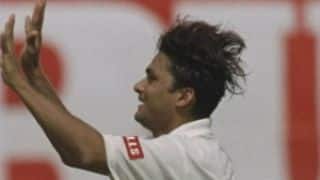