Debutant Ravindra Jadeja and Piyush Chawla picked up a wicket each after speedster Ishant Sharma struck twice in the morning to help India keep England under check at tea on the first day of the fourth and final cricket Test here today. 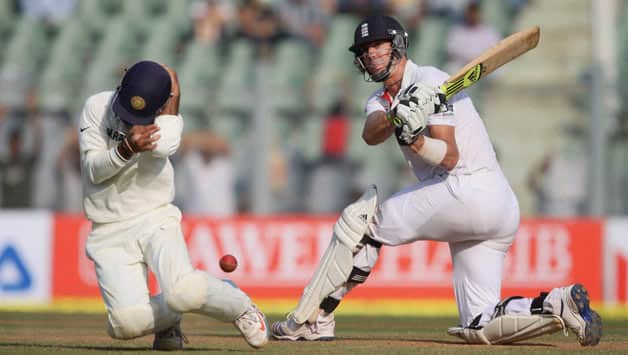 Debutant Ravindra Jadeja and Piyush Chawla picked up a wicket each after speedster Ishant Sharma struck twice in the morning to help India keep England under check at tea on the first day of the fourth and final cricket Test here today.

Left-arm spinner Jadeja and leg-spinner Chawla sent back Jonathan Trott and Ian Bell in the post-lunch period after Sharma had given India a rousing start in the morning session by dismissing openers Alastair Cook and Nick Compton cheaply.

Kevin Pietersen was unconquered on 68 after a stay of 193 minutes in which he hit nine fours along with debutant Joe Root (10) as England reached 133 for four at tea after the visitors won the toss and opted to bat.

The tourists, 61 for two at lunch, added 72 runs in 32 overs while losing Trott and Bell, in the second session.

For India, lone pacer Sharma was the most impressive of the lot and troubled the English batsmen with his aggressive bowling on a slow and low track. His tea figures were two for 25 in 14 overs.

Jadeja had figures one for 22 at tea while Chawla had one for 25.

First choice slow bowlers Pragyan Ojha, India’s most successful bowler so far in the series, and Ravichandran Ashwin were wicket-less at the break.

Pietersen and Trott rallied England after the visitors’ poor start when they were reduced to 16 for two by Sharma’s twin strike in his first spell.

Coming together in the first hour of play in the 11th over, the third wicket pair saw England to lunch without being separated and then continued in the same vein post the interval, putting on a partnership worth 86 runs in 39.1 overs to wrest back the initiative from India.

Pietersen and Trott easily negotiated the four-spin attack quite comfortably though the later looked in two minds whenever Sharma dug the ball short.

The duo helped England add 40 runs in the first hour in 16 overs before Trott played for the turn and shouldered arms to a ball from Jadeja that held its line and crashed into the off stump.

Pietersen appeared in no trouble at the other end and completed his 50 in 108 balls with a four off Ashwin.

Pietersen, on 61 in a total of 112 for three, could have been caught off a firm flick at short mid-wicket by Cheteshwar Pujara but the ball fell just short of the fielder.

Chawla, who bowled five overs in his first spell, replaced Sharma and struck almost immediately when Bell, who scored just one off 28 balls, played a loose drive to a well-tossed up delivery straight to Virat Kohli at extra cover.

In the morning session, Sharma struck two big blows in the first hour of play in the form of Cook (1) and his opening partner Compton (3).

Sharma had Compton caught behind to leave England three for one and then trapped in-form Cook leg before to leave the visitors gasping at 16 for 2 in the 11th over.

Trott and and Pietersen then steadied the rocking boat and took the visitors to lunch at 61 without further loss on a pitch displaying some uneven bounce.