Pakistan’s anti-corruption tribunal handed Khalid Latif a 5-year ban over PSL 2016-17 spot-fixing case on Wednesday. A month ago, Sharjeel Khan was also given a ban of same duration in the same case. “Latif is banned for five years and fined one million rupees after the proceedings of the case,” the three-member tribunal announced.

Latif was charged for luring other players to participate in fixing and also breaching other six clauses. Sharjeel and Latif had met a bookie and struck a deal.

Based on the plan, Sharjeel an aggressive batsman who scores quickly agreed to play two dot balls after the first over. Pakistan Cricket Board (PCB) provisionally suspended Latif and Sharjeel after they found evidence of spot-fixing during a contest between Islamabad United and Peshawar Zalmi in Dubai, in February. Although Latif did not play in that game, he was later charged for luring Sharjeel into the deal and not reporting the matter to the PCB anti-corruption unit.

Four other players, Mohammad Irfan, Shahzaib Hasan, Nasir Jamshed and Mohammad Nawaz , were also included in the investigation on multiple charges. Irfan and Nawaz admitted not reporting the bookie’s offer. Irfan was handed a six-month suspension and PKR one-million fine, where Nawaz was banned for two months and fined PKR 200,0000. 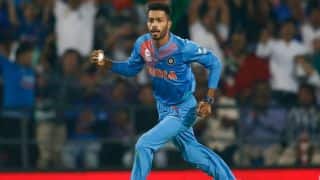