Khurram Khan dismissed for 44 against Pakistan in ICC Cricket World Cup 2015, Pool B match 22 at Napier

Khurram Khan dismissed for 44 against Pakistan in ICC Cricket World Cup 2015, Pool B match 22 at Napier

Khurram Khan has built a good partnership with Shaiman Anwar.

Khurram Khan is dismissed for 43 off 54 deliveries as Sohaib Maqsood picks up is first wicket in One-Day Internationals (ODIs)  in ICC Cricket World Cup 2015, Pool B Match 25 at Napier. Shaiman Anwar was giving him good support at the other end, as he inches closer to his half-century after scoring an impressive century against Ireland a few days back. LIVE BLOG: Pakistan vs UAE

Pakistan are very much on top after their bowlers have been n target since the beginning of the innings. Chasing 340 for a win, UAE never got things going for them as they found themselves at 25 for three at the end of 10 overs. It will be test of their character to see how they go on from here. Indian-born Swapnil Patil is the new batsman and he will hope to get his team in a secure position. SCORECARD: Pakistan vs UAE in ICC Cricket World Cup 2015

UAE had won the toss earlier and decided that they will have a bowl first. Pakistan put on 339 for six in their 50 overs, courtesy of fifties from Ahmed Shehzad, Haris Sohail and Misbah-ul-Haq. A win for Pakistan will put them in firm contention to make it to last eight of the mega event. UAE will look to show some character and get close to the target as much as they can. LIVE CRICKET STREAMING: Pakistan vs UAE 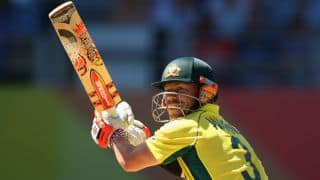