Currently, UAE are 24 for the loss of four wickets in seven overs with Shaiman Anwar on two.

UAE veteran batsman, Khurram Khan was dismissed for mere five by fast-bowler, Jerome Taylor after being bowled by him, against former two-time world champions, West Indies, in their final group stage clash of Pool B, match 41 of the ICC Cricket World Cup 2015 at the McLean Park in Napier on Sunday. Currently, UAE are 24 for the loss of four wickets in seven overs with Shaiman Anwar on two and Swapnil Patil on one. Live Updates: West Indies vs UAE 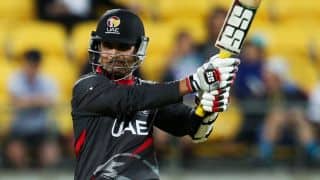