India international Smriti Mandhana produced yet another power-packed performance as she made a century to help her side Western Storm to beat Lancashire Thunder and catapulted them to the second place of the Kia Super League 2018 table. In the process she struck her first T20 century.

In the third over of the Storm innings, bowled by Cross, Mandhana struck two sixes to take Storm to 29 for 1. She lost partner Heather Knight for just eight, caught in the deep off Emma Lamb. Mandhana continued on the chase with a no nonsense approach in the company of West Indian Stefanie Taylor. Mandhana’s half-century was reached from just 34 balls and she accelerated better post reaching the landmark. Mandhana and Taylor put on 105. Mandhana fell for 102 from 61 balls, with 12 fours and four sixes in her superb innings. Victory came two balls later, with 10 balls to spare.

Earlier, it was Australian Nicole Bolton, fresh from her 87 from 61 balls in the last game against Surrey Stars, who hit quick runs in the beginning. Amy Satterthwaite produced her best-ever score for Lancashire with an unbeaten 85 to guide her side to 153 for 7. In the final analysis, this seemed to be not enough for Western Storm to overcome.

Storm move on to face Yorkshire Diamonds at Scarborough on Sunday while Thunder are back at Old Trafford on Tuesday to face Surrey Stars. 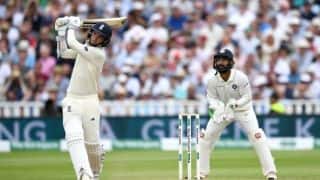 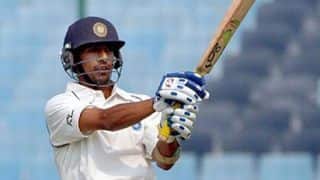