It was Pollard's first ever six sixes in an over while the previous best was five.

West Indies explosive batsman, Kieron Pollard joined the list of greats when he hit six sixes in an over at Prince Alfred College on Tuesday during a trail game.

Brad Hodge, who was at the non-striker’s end believed that one of them went for over 140 meters. “It’s the biggest hit I’ve seen in a long time and I don’t even reckon he got all of it. It’s pretty scary stuff. He just said I’ve had enough and thought I’ll try and hit a few here,” he said to the official website of Adelaide Strikers.

When you sit at the other end, you just think how unbelievable that is, just the strength of the man, the skill of the human being. It’s good he’s come here in good form and a scary thought for any other player. It was cool fun watching, the ease he does it with is unbelievable,” he added.

It was Pollard’s first ever six sixes in an over while the previous best was five against Anthony Martin in a T20 encounter in Caribbean.

Pollard’s score of 48 in the trail match came in just 27 deliveries after a slow start to his innings as the team gets ready to face Melbourne Stars in the opening match of the night for the 2014-15 Big Bash league. 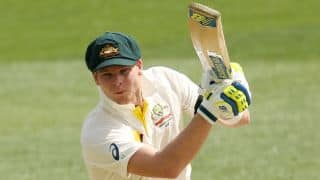 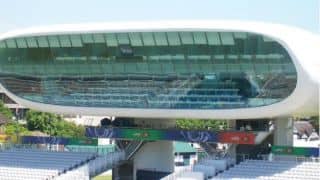