CWI have announced a 15-man squad for the five-ODI series against India that includes three new faces after Chris Gayle declined selection.

Cricket West Indies (CWI) have announced a 15-man squad for the five-ODI series against India that includes three new faces after veteran opener Chris Gayle declined selection for the tour. Kieron Pollard and Darren Bravo have returned to the international fold after being named in a separate 15-man squad for the India T20I series.

Opener Chandrapaul Hemraj, fast bowler Oshane Thomas and allrounder Fabian Allen have received a maiden call-up while Sunil Ambris, who played his only ODI in September 2017, has been recalled as Windies start fine-tuning their preparations for the ICC World Cup 2019 to be held in England.

Gayle, 39, has opted out of the India ODIs and the following tour of Bangladesh but has made himself avaliable for the home series against England and the World Cup next year. Also missing from the ODI squad is big-hitting allrounder Andre Russell through injury but is expected to fully recover for the three-match T20I series that starts from November 4.

Bridging the rift that had developed between CWI and several of its high profile players based on various issues in the past, the board, while keeping the 50-over World Cup in mind, has attempted to reintegrate the estranged cricketers.

“As we continue our Cricket World Cup preparations, the upcoming tour of India provides a great opportunity to expose some of our young talent,” CWI’s chairman of selection panel Courtney Browne said in a statement on Monday. “We will be without our stalwart, Chris Gayle for this Indian tour and the next tour against Bangladesh as he has declined selection at this time, however, he has made himself available for the selection for the visit of England to the Caribbean and the CWC in 2019.”

As is the case with the ODIs, the T20I sqaud also features three newcomers including left-arm pacer Obed McCoy, batsman Sherfane Rutherford and left-arm spinner Khary Pierre. However, pacer Alzarri Joseph will have to undergo a fitness test before leaving for India.

“… with the 2020 ICC World T20 two years away and the limited amount of T20 Internationals within the next year, the panel believes at this juncture it is time to invest in the young players that have emerged over the last two years from WINDIES A and B teams, along with 2018 CPL. The panel believes that this new group of cricketers, in addition to their cricketing skills, will have the athleticism needed to improve our fielding, which will be vital to our success,” 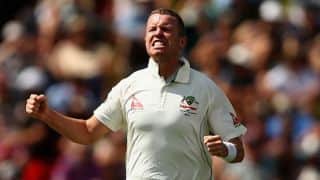