Kieron Pollard and Jos Buttler stitch up a 21-ball 55-run partnership to take MI at the 4th spot in the points table of IPL 9.

Mumbai Indians (MI) put up a commanding show to edge past Royal Challengers Bangalore (RCB) by 6 wickets in Match 41 of Indian Premier League (IPL) 2016 at Bangalore, thanks to Kieron Pollard and Jos Buttler’s late rampage. Earlier, MI won the toss and elected to bowl first. Captains these days prefer bowling first, as they find it easier to estimate a run chase in T20s. Virat Kohli started the proceeding by clearing Tim Southee’s out-swinging delivery over extra cover. However, his stay was cut short by the in-form Mitchell McClenaghan. MI fed on Kohli’s weakness by bowling in the corridor of uncertainty. Due to extra pace and bounce, Kohli couldn’t keep it down and edged it to Harbhajan Singh at fly slip. Indeed it was a rare failure, as this was Kohli’s first single-digit score of IPL 9. Full Scorecard: Royal Challengers Bangalore vs Mumbai Indians, IPL 2016, Match 41 at Bangalore

To make matters worse, the Caribbean marauder Chris Gayle joined Kohli in the dug out, as he tried to go down town but eventually top-edged it to Rohit Sharma at mid off. However, it was KL Rahul in forefront of a rescue mission. He put a price on his wicket and dissected as well as cleared the field with ease and grace. He brought up his 4th fifty of IPL 9 in 42 balls. Rahul and Sachin Baby gave the finishing touches and posted a 152-run target for MI.

MI started the run chase similarly the way RCB did. They lost the rampant Parthiv Patel on 1. The onus was then on Rohit Sharma and Ambati Rayudu to steady the MI ship. They stitched up a 58-run partnership before Rohit holed out a back-of-length ball to AB de Villiers at long, in the pursuit of scaling up the run-rate.

Despite losing wickets, Rayudu kept the scoreboard ticking and played a cautious 44-run innings to keep MI’s hopes alive. However, de Villiers took a blinder of a catch to send Rayudu back to the pavilion and kept RCB in the hunt.

MI needed 50 off the last 4 overs, with Kieron Pollard and Jos Buttler in thick of the action. Kohli went to his go-to bowler Shane Watson for another breakthrough. But Pollard went on rampage and plundered 17 runs off it and changed the equation of the match. To add more to the fire, Jos Buttler grabbed the RCB bowlers by their collar and scythed 29 runs off just 11 balls to take MI to the 4th spot in the points table.

Player of the Match: Krunal Pandya 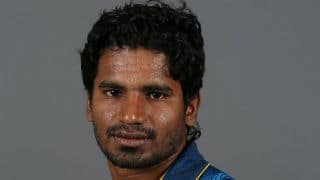 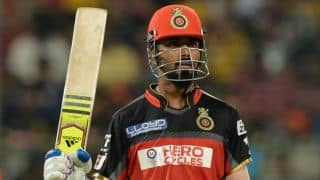