MI managed to get out of trouble to post a formidable 183 for seven against CSK.

Kieron Pollard and Rohit Sharma helped Mumbai Indians (MI) recover from a muddle to post a formidable total of 183 for seven against Chennai Super Kings (CSK) in their Indian Premier League (IPL) 2015 encounter at the Wankhede Stadium. At one stage, MI were in total shambles until skipper Rohit stabilised them with a well-timed knock. Pollard walked out with about 10 overs to go and turned the tide in MI’s favour with a strokeful 64. The 75-run stand between Rohit and Pollard infused much needed optimism in the MI camp and injected momentum in the innings.

Having won the toss, MI chose to bat with three changes to their side. Aaron Finch’s injury meant that Lendl Simmons was back in the playing eleven. Ambati Rayudu returned to replace Unmukt Chand and Harbhajan Singh recovered from his injury to regain his spot ahead of Shreyas Gopal. At the back of three defeats this year, MI remain uncertain about their batting line-up and that reflected in the first half of the innings.

Parthiv Patel was dismissed in the first over, trapped leg-before by Ashish Nehra. Corey Anderson walked out at No. 3 and scored only four as he was brilliantly caught by Faf du Plessis running from mid-off. Simmons, who had played out a maiden over, was also dismissed cheaply when he holed out to mid-off. In the fourth over, MI looked clueless at 12 for three. In walks Harbhajan Singh at No. 5, ahead of Pollard and Rayudu — which was all the more surprising.

Harbhajan chased everything and was sent out to attack. Many aerial shots fell in no-man’s land, one went for six and a few managed to elude fielders. At the other end, Rohit went about his job well, driving with ease and playing risk free cricket. In tandem, they put up 45 before Harbhajan was dismissed for 24 in the tenth over.

Then came the Pollard show as he put up 75 with Rohit in only 33 balls. Off those 75, Pollard smashed 45 as he carted the ball easily. He started off by smashing the first ball he faced from Ravindra Jadeja for a six down the ground. The ease with which Pollard smashed it was jaw-dropping. There were times when mis-hits went for six. Rohit played an attractive innings at the other end, getting his fifty in 30 balls. But, with Pollard going strong, he was eclipsed.

Once Rohit was dismissed for 50 in the 15th over, Rayudu walked out. It was quite surprising that MI had kept Rayudu back. Intent on proving himself, he too joined the party and got some good hits late in the innings to help them push at the death. Dwayne Bravo managed to dent MI in the last over as he dismissed Rayudu and Pollard off consecutive deliveries.

The onslaught in the middle clearly pushed CSK to make changes to their plans. Jadeja had gone for 49 off his four overs, with his last going for 26. Ravichandran Ashwin bowled the solitary over and was hit for 13. MS Dhoni knew that he had to rely on the pacers. Nehra was the best bowler for CSK on the day. He bowled his four upfront, conceding only 23 and took three wickets. 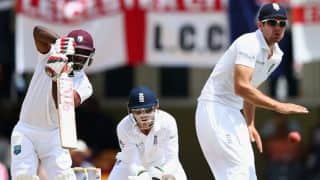