Punjab bowlers were clinical as Knights had no answer to the huge score.

Kings XI Punjab (KXIP) crusied to  a comfortable win against Northern Knights as the Indian Premier League (IPL) runners-up cruised to a massive 120 run victory to take a huge step in the Champions League Twenty20 (CLT20) latter stages. Apart from a brief threat from Kane Williamson and Anton Devcich, the Knights’ batsmen threw their wickets away cheaply and handed the match to the mighty hosts as the New Zealand sat on the brink of elimination from the tournament while KXIP were in pole position to qualify from the group. Karanveer Singh was the standout bowler for the victors, as he finished with figures of four for 15.

Earlier, KXIP  yet again made full use of the home conditions as the Northern Knights bowlers were smashed to every corner of the Mohali stadium in the 13th match of the Champions League Twenty20 (CLT20), with Manan Vohra leading from the front with a blazing knock of 65 from just 32 balls. Vohra was well supported by senior partner Virender Sehwag (52) and  good cameo from David Miller lower down the order as the home team posted a humungous 214 for five, after being sent to bat.

Kane Williamson and Anton Devcich were looking in fine touch and Williamson in particular was always going to be a threat given his class and pedigree and Devcich was playing some unorthodox shots but the result was the same as runs were coming thick and fast for the Knights. Devcich was playing some spanking shots as he grew in confidence and slammed a cracking six of Thisara Perera to the fine leg boundary. The Williamson tried a one-legged flick to fine-leg and could on;y nick it to keeper Wriddhiman Saha.

There was another breakthrough for Kings XI Punjab (KXIP) as Anton Devcich played a reverse sweep which ended up being awfully wrong and the the bearded southpaw could only get a top edge and Karanveer Singh took a safe catch. Some brilliant work by George Bailey at gully almost gave the hosts another wicket but Akshar Patel could not gather the ball while taking off the bails.

Daniel Flynn and BJ Watling were left with picking up the pieces after losing Kane Williamson and Anton Devcich in successive overs. Karanveer Singh inflicted further damage by trapping the captain leg-before. The dismissal was well set up by Karanveer after the Punjab spinner’s loop and flight had Flynn in a tangle before the fourth wicket fell for the New Zealanders.

Wickets were tumbling like nine pins as Glenn Maxwell’s turn and throw hit bulls’ eye and Scott Styris was given his marching orders from what was a spectacular bit of fielding from the Australian. Then BJ Watling threw his wicket in the deep to Anureet Singh. From there on, the Kiwis simply capitulated and crashed to yet another landslide loss.

Man of the Match: Manan Vohra 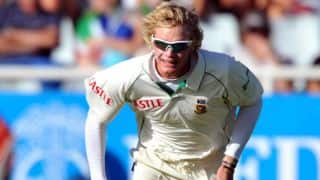 CLT20 2014: Sybrand Engelbrecht says he was not expecting to bowl the Super Over