Kings XI Punjab batsman David Miller  continued from where he left off against the Pune Warriors India as he guided his side a comprehensive five-wicket victory over the Delhi Daredevils.

Punjab won by 5 wkts
Man of the Match: Harmeet Singh 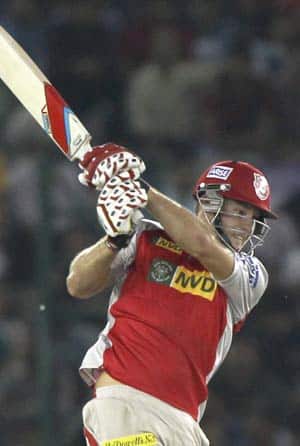 Kings XI Punjab batsman David Miller  continued from where he left off against the Pune Warriors India as he guided his side a comprehensive five-wicket victory over the Delhi Daredevils.

The Punjab had a very similar start to their previous ones, with skipper Adam Gilchrist failing once again. But his departure in the first over had negligible impact on the proceedings of the game as Mandeep Singh took the attack to the Delhi bowlers .He welcomed Ashsh Nehra with three exquisite strokes to the boundary. Nehra bowled a loosener to Mandeep who caressed it through cover. Nehra followed it up with a full and wide delivery which was dispatched over cover fielder by Mandeep.

Mandeep and Luke Pomersbach showed great urgency as they hit Irfan Pathan for 19 runs off the next over, taking the team total to 40/1 off just three overs.

Skipper Mahela Jayawardene introduced spin from both ends, through Johan Botha and Roelof van der Merwe to halt the run flow. Van der Merwe went onto give his side a breakthrough as he sent back Pomersbach to the pavilion.

Punjab lost their third wicket in the next over as a wonderful effort in the field by David Warner sent back Mandeep. Jayawardene brought in Umesh Yadav in the last over of the powerplay to attack the new batsmen in the middle and force a couple of more wickets to put Punjab on the back foot.

But defending just 120 on a good batting surface was always going to be a big ask. Manan Vohra was the fourth man to fall, but David Miller and David Hussey put on 40 runs for the fifth wicket to take the game by the scruff of its neck. Hussey was dismissed in the 16th over but it was too late for Delhi’s comeback. In the end, Punjab went past the Delhi total with 20 balls to spare to win their third consecutive match.

Man of the Match: Harmeet Singh