Sehwag completed his fifty as Punjab reached 148 for three in 14 overs.

The crowd favourite Glencharan Singh aka Glenn Maxwell came to the crease and wasted no time before going after the bowling and a top edge went high up in the air and wicketkeeper BJ Watling spooned a simple catch to send a sigh of relief around Chandigarh. The relief didn’t last for long though as a full blooded thump on the leg-side as the ball only found Tim Southee at deep-square leg. Then Sehwag carted the last ball of the same Ish Sodhi over as he completed his fifty.

Spin seemed like the only way out for Northern Knights as Kings XI Punjab (KXIP) batsmen continued to take the attack to the cleaners and the intention was clear — to go big and muscle the ball over the ropes. Thisara Perera and Virender Sehwag looked to do just that. Scott Kuggeleijn sprayed the ball on the leg side and was put away in style to the fine leg boundary as Sehwag inched towards his fifty. Perera continued to go hell for leather and a big heave off Scott Kuggeleijn could only find Scott Styris’s safe hands. 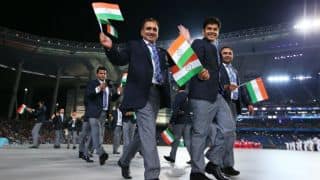