Punjab have raced to 40 for no loss in four overs.

Manan Vohra looked in solid touch in the third over and was middling the ball well. Virender Sehwag, meanwhile was tentative and had a nervy moment when a half-hearted edge went slightly past first slip and into the ropes. The upper cut of Scott Kuggelijn was vintage stuff from the veteran Indian opener and he simply guided the ball effortlessly over the third man ropes.

Virender Sehwag and Manan Vohra and started proceedings and it was singles in the early part of the Trent Boult over. Then Manan Vohra played a gorgeous straight drive and the ball beat the infield and raced to the ropes. There were more flashes of elegance as Vohra flicked the ball of his pads and the ball raced to the square leg boundary for another four and it was 11 from the opening over. There were more runs for the Punjab opener  and the ball is flicked away for another flick for a couple.

Tim Southee tried to intimidate Vohra with a short ball but the length was awful and Vohra hooked towards the fine-leg boundary and the ball went over the ropes and capped the over with a couple of the last ball.

Kings XI Punjab have been in flying form and and will be looking of their repeat in the smash and grab win against Barbados Tridents. Northern Knights meanwhile are coming back after a shocking display in their previous game. It was Knights’ captain who won the toss and decided to send the home side into bat first. 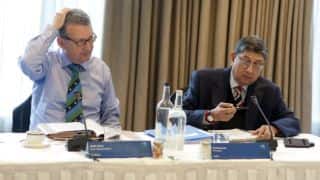 AGM postponed to Nov 20th as BCCI violates it's own constitution