Although Narine is free to bowl in international matches, he will certainly be under immense pressure.

The Kolkata Knight Riders team management stood by their star spinner Sunil Narine, who won’t be able to bowl in their Champions League T20 summit clash against Chennai Super Kings in Bangalore tomorrow, and is hopeful that he will come back strongly despite this setback.

“Sunil is not only a fantastic cricketer but also a brilliant team man. Right now, we are not thinking about anything else but we want him to come back strongly and not get disheartened. We are with him and we will help him in all necessary manner,” KKR Team Director Joy Bhattacharjya told PTI today.

Asked if KKR would appeal against the decision, Bhattacharjya clarified, “As per the rules and guidelines of the CLT20, there are no provisions for appealing. If three umpires — two on-field and the third umpire have felt that his action is suspect, you have to respect their decision.”

Narine’s quicker delivery has come under scanner during the ongoing Champions League T20 and on-field umpires C Shamshuddin and Anil Chaudhary reported during the final group league match against the Dolphins. As per rules, Narine would have been barred if he had bowled the quicker delivery once again in the tournament and that’s precisely what had happened in the semi-final match between KKR and Hobart Hurricanes.

On-field umpires Rod Tucker and S Ravi expressed their suspicion about his quicker delivery and subsequently banned him from bowling in the final match. Although Narine is free to bowl in international matches, he will certainly be under immense pressure during the upcoming five-match ODI series between India and the West Indies, where some of these international umpires are set to officiate. 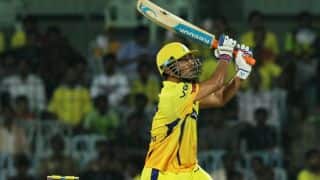