KL Rahul: It was not an easy wicket to bat on against MI in IPL 2016

KL Rahul: It was not an easy wicket to bat on against MI in IPL 2016

RCB's KL Rahul, who top-scored in a losing cause in their previous IPL game, said MI benefited as the pitch at the Chinnaswamy Stadium.

“We discussed in the middle to stick on and build a partnership, and may be after 10 overs decide on a target. Unfortunately, AB de Villiers got out, but we were happy to have posted 150 odd runs. Obviously, in the second half, the wicket became a little bit easy for batting,” Rahul said. Rahul said he donned the role of an opener when he walked out to bat as Kohli and Gayle were dismissed early.

Moreover, the team had stressed on flexible batting line-up, which did not click due to the bad start, he added. “That was the plan, and that’s what we discussed in the team meeting, to be flexible. Unfortunately, we lost Chris and Virat early, and it wasn’t in any way a good start for the team, but I played the role of an opener when I went in to bat early on,” he said. PHOTOS: Royal Challengers Bangalore vs Mumbai Indians, IPL 2016, Match 41 at

Asked about Gayle, who is struggling for form at the moment, Rahul said, “In this game, we decided on Chris to open the innings as he is a dangerous batsman, and we all know that. If he fires he can get us 250 runs on any wicket and any ground. But that doesn’t happen as always.” Mumbai Indians’ Krunal Pandya said he was surprised to have won the Man of the Match as mostly the award goes to a batsman in this slam-bang league.

“Yeah [I was surprised] that a bowler got the Man of the Match in this format. However, I am very happy the way I bowled today. Getting a result in our favour was like icing on the cake,” he said. Replying to a query, Krunal said, “Actually the wicket was not a normal Bangalore wicket. Today it was on a slower side. The ball was gripping slightly, so when we went into bat our plan was to keep wickets at the back end, and 150 runs target here is gettable because of the smaller size of the ground.”

"I know that feel bro," KXIP shows sympathy to RPS 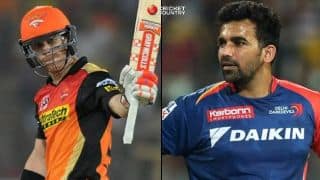