Rahul opened the innings for India with Karun Nair, after his side was set a target of 169 by Zimbabwe in the first ODI at Harare.

Right-handed batsman KL Rahul on Saturday created the record of the highest individual score for any batsman on his ODI debut for India. Rahul, playing in his first-ever ODI for India, rewrote the history when he went past the mark of 86 runs — set by Robin Uthappa against England at Indore in 2006. The two Karnataka batsmen now hold the record of most runs by batsmen on their ODI debuts for India. Rahul, who was handed his ODI cap earlier in the day, had already become the 13th overall cricketer and second Indian opener ever to score a half-century on debut. Full Cricket Scorecard: Zimbabwe vs India, IPL 2016, 1st ODI match, at Harare

Rahul opened the innings for India with Karun Nair, after his side was set a target of 169 by Zimbabwe in the first ODI at Harare. Rahul remained undeterred throughout India’s chase, even though Nair — one of the three debutants for India — fell cheaply for 7. ALSO READ: KL Rahul 1st Indian to score century on ODI debut

The right-handed batsman, who has been working on his wicketkeeping skills as well to bolster the chances for India selection, was included in the Indian cricket team after a successful season of the Indian Premier League (IPL) 2016. Rahul scored as many as 397 runs at a very impressive average of 44.11.

He is the only cricketer who has been named in India’s current series, which includes the ongoing limited-overs affair against Zimbabwe. After the three ODIs and as many T20Is, Rahul will be heading to the West Indies as India will be taking on the Caribbean side in the four-match Test series in July-August 2016. 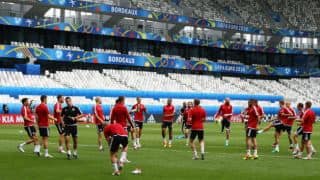