KL Rahul‘s fifty helped India go into lunch at 122 for two on Day Three of the fourth Test against Australia at the Sydney Cricket Ground. Rahul scored his maiden Test fifty, with Rohit Sharma getting his second while batting at No. 3.

It was quite an attritional morning of cricket as India scored only 51 runs. Rahul and Rohit resumed the day and were solid. Run-scoring was not easy as the Australians bowled in the tight channels. To watch Rohit wait it out was a surprise, but he did show the different side to his batting. On the other hand, Rahul brought all that domestic experience into play and was disciplined in his strokeplay.

Rohit got to his fifty with a four over cover off the fast bowler. However, he soon attempted a sweep off Nathan Lyon and dragged the ball back onto his stumps. Virat Kohli walked in and there was a comedy of errors off the first ball. Lyon got one to spin past him and Brad Haddin fumbled. Rahul was half-way down the track, while Kohli sent him back. Rahul slipped while turning, but managed to get back into the crease.

Though there weren’t too many runs, a few shots stood out. Rahul played one behind point off Shane Watson, dropping his wrists and playing it along the ground. Kohli pulled a short one from Mitchell Starc for a four. India have battled out the first morning and Kohli’s arrival promises to bring in more positivity.

Rahul did survive a few scares. He had got a faint glove to the bat-pad off Nathan Lyon, but was not given. On 46, he top-edged a pull, but Steven Smith failed to latch onto it running back from first-slip. He seemed to have lost it in the sun and with the Spider-cam in the vicinity. Rahul got to his fifty just before lunch as he hit a boundary off Lyon. 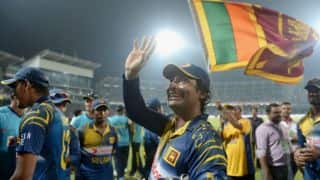