Trinbago Knight Riders (TKR) defeated St Kitts & Nevis Patriots by six wickets in the Caribbean Premier League (CPL) Eliminator on Sunday to enter the second qualifier at the Providence Stadium on Sunday. After restricting Patriots to 125/7, a patient half-century from opener Lendl Simmons helped them recover from 31/3. Knight Riders captain Kieron Pollard (26* off 9) then struck a four and three sixes to help them overhaul the target in 18.4 overs.

Knight Riders opted to bowl first and reduced Patriots to 30/3 in 6.2 overs. Mohammad Hafeez was well caught by a back-pedalling Akeal Hosein at extra-cover for just 11. Chris Jordan got one straight through Brooks’ expansive straight drive in the final over of the fielding restrictions, bringing Laurie Evans to the crease.

Having gone for just 1 off his first over back from injury, Sunil Narine then had Evin Lewis caught and bowled off a leading edge for 9. Evans and Devon Thomas attempted to rebuild amidst showers in Guyana with a 51-run partnership for the fourth wicket.

Thomas was adjudged lbw for 10. Despite pain in his finger, Narine finished with outstanding figures of 2-10 from his four overs that included 19 dot balls.

Evans reached his 50 off 44 balls with a boundary off Sussex teammate Jordan in the 18th over. Skipper Carlos Brathwaite struggled before holing out to Colin Munro at long on later in the Jordan over for 3. Fabian Allen got going with a wristy four first ball, but was deprived of further boundaries by excellent diving stops from Lendl Simmons and Khary Pierre.

Jordan had Allen caught in the final over to finish with 3/30.

Narine started with 8 off 2 in Sheldon Cottrell’s first over, but the bowler sort of exacted revenge in the following over, catching him at deep-midwicket off Alzarri Joseph. Cottrell was soon saluting, bowling Munro in the third over for a fifth ball duck leaving Knight Riders 16/2.

A wicket maiden from Rayad Emrit to finish the PowerPlay saw Darren Bravo depart for 1 off 10. Then, Denesh Ramdin (32* off 38) played himself in to the tune of 4 off 13 balls at the halfway mark with Simmons 24 off 29. They needed 83 off 60 balls with seven wickets remaining.

Pollard was left with plenty to do, requiring 48 off 27 balls when he entered the fray with a sore quadricep.

Once Pollard struck a six off his third ball, Ramdin at last broke the shackles too; on his 31st ball he hit his first boundary – a six. With a four next ball he was now 23 off 32 balls. This expensive Cottrell over made the equation 27 required off 18 balls.

Pollard took a shine to Braithwaite, smacking his compatriot over the ropes and cover driving him for four to win the game. 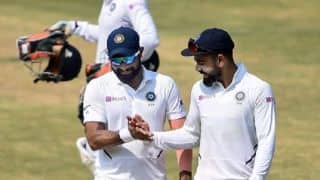 Virat Kohli gives us the freedom to follow our own strategy during the match: Shami 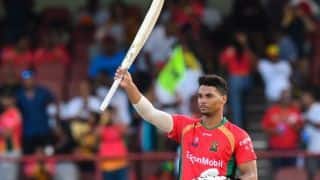