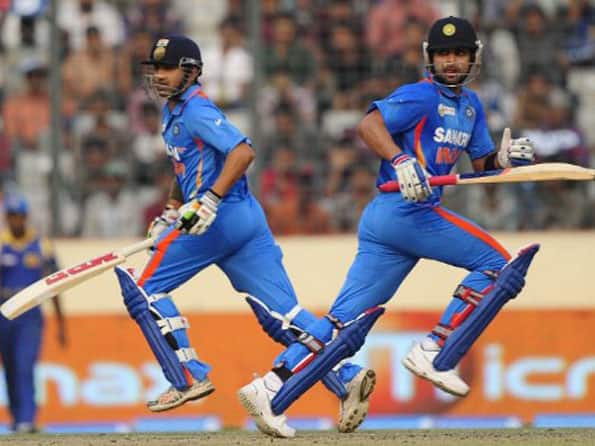 Gambhir (100), who struggled in Australia against rising deliveries on pacy tracks in the Test series, seemed comfortable in the familiar sub-continental environs as he and the in-form Kohli (108) batted together for 37 overs.

The duo added 205 runs for the second wicket at a brisk pace of more than five an over to steer the Indian innings after the early fall of Sachin Tendulkar. Both the batsmen, in fact, perished in the 43rd over, dismissed by Farveez Mahroof in the space of just one delivery.

Interestingly, both the batsmen completed their tenth ODI hundreds.

It was not a very good start to the proceedings for India as Tendulkar (6) continued his frustrating quest for a 100th international century which has extended for more than a year now.

The veteran right-hander was dismissed off a Suranga Lakmal full toss in the sixth over of the innings after facing 19 deliveries.

But the Indian felt that it was a no ball as it had gone above the waist. The on-field officials referred the matter to the third umpire, who found it to be a legitimate delivery after going through the TV replays.

But his dismissal hardly affected the Indian innings which accelerated after Gambhir was joined by Kohli, the most successful Indian batsman — the only one to get a hundred — in what was a disastrous tour of Australia.

Gambhir got a life in the 17th over when he was dropped by Dinesh Chandimal in the long on region off Seekkuge Prasanna’s bowling.

The left-hander was on 36 when he chipped one in the air but Chandimal, who ran a considerably to his left to get to the ball, could not balance himself after diving in front to grab the ball, which popped out of his hands as he touched the ground.

Gambhir and Kohli completed a century stand off 123 balls which was the 70th overall for the second wicket for India.

Only Australia, with 77 century stands for the second wicket, have more.

They didn’t stop at that and bettered the stand with some thoughtful strokeplay and restraint. Both the naturally aggressive batsmen were patient in their approach and did not succumb to the temptation of extravagant shots.

Both the batsmen knocked off seven fours each. While Kholi took 120 deliveries, Gambhir’s innings came off 118 balls.

The identical innings came to an end almost at the same time with Gambhir holing out to Upul Tharanga in the long on region while Kohli was caught by Lahiru Thirimanne in the extra cover region.

Down the order, skipper Mahendra Singh Dhoni (46) and Suresh Raina (30) provided some entertainment for the sparse crowd. The duo shared 10 fours and a couple of sixes between them during an unbeaten 78-run stand that came off 43 deliveries.

Half a dozen of these fours and a six came off Dhoni’s bat.(PTI)