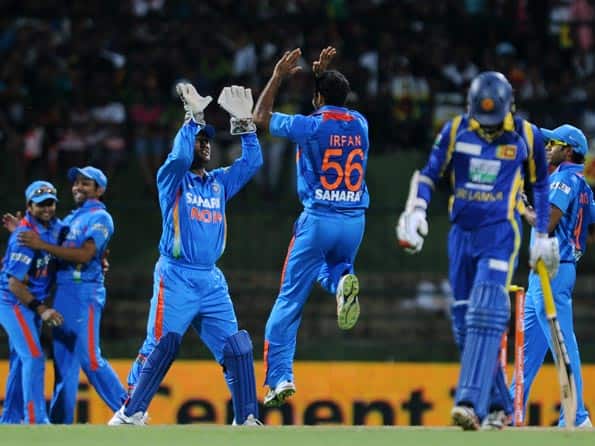 Riding on Kohli’s well-crafted 68, the Indians managed to put up a respectable 155 for three. In reply, Sri Lanka were bundled out for 116 in 18 overs, largely due to Pathan (3/27) and career-best effort of four for 19 by Ashok Dinda.

Pathan bowled a fine opening spell as he dismissed Tillakaratne Dilshan (0), Upul Tharanga (5) and the dangerous Mahela Jayawardene (26, 5×4) during his first spell of three overs. If Pathan ran through the top-order, Dinda cleaned up the lower order, taking the last three wickets without conceding a run.

Aided by condition that helped seamers, Pathan repeatedly swung the ball back into the right handers as he induced Dilshan into playing across the line and getting him castled in the process.

Left-hander Tharanga got a ball that swung away from him as he went for a drive only to offer a simple catch to first slip.

Jayawardene, who hit Umesh Yadav for four boundaries in an over, got one from Pathan that came back to hit him on the pads. The Lankan skipper wasn’t happy as he felt that the delivery might have been missing the leg-stump.

At 35 for three, Lahiru Thirimanne (20) and Angelo Mathews (31) joined hands to add 33 runs before Ravichandran Ashwin dismissed the former who went for an ambitious reverse sweep. At 68 for four, things looked ominous for the islanders.

Mathews edged one to Dhoni off Dinda and Jeevan Mendis hit one from Yadav straight to Rahane at covers. At 100 for six, the Lankans could hardly do anything better than wait for the inevitable.

Earlier, Kohli, who is in the form of his life, smashed his way to a 48-ball 68 and shared a couple of crucial partnerships, including 74 runs with Ajinkya Rahane (21) and 48 with Suresh Raina (34 no, 3×4, 1×6) for the second and third wickets respectively.

Kohli’s innings consisted of 11 boundaries and a six.

However, India couldn’t accelerate much towards the end, managing only 84 runs in the last 10 overs, with a meagre 35 coming off the last five.

Put in to bat, Gautam Gambhir (6) got a reprieve when his mistimed pull-shot was dropped at deep mid-wicket by Shaminda Eranga. However, the rookie pacer made amends as he bowled the senior opener, who again went for an identical shot only to see his stumps pegged back.

Kohli can do no wrong these days and he put the Lankans on the back foot with a flurry of fours. A couple off Mathews was followed by three in the second over of Eranga.

Among the shots Kohli hit, a cover drive off Mathews and a shot through point region were the stand-out ones.

The Delhi lad was off the blocks in a flash but the same can’t be said about Rahane who was finding it difficult to score runs on a track where the ball was doing a bit.

Rahane finally got something going his way as he hit Thisara Perera over extra cover for a big six before offering a simple return catch to Mendis. Kohli finally completed his maiden T20I half-century off 32 balls when he hit left-arm spinner Rangana Herath over extra-cover for a boundary.

The shot of the innings, however, was a six by Kohli off leggie Mendis’ bowling. Mendis fired it down leg-side as the batsmen came down the track. Kohli maintained perfect balance as he converted it into an overpitched delivery.

He finally holed out in the deep off Eranga’s bowling, when his cross-batted shot failed to clear the deep mid-wicket fielder. Kohli’s departure slowed down things as the Lankan bowlers were successful in bowling a number of dot balls.

Raina, who has been an effective T20 player, hit some crisp shots in between those dot balls, including a lofted six, as India crossed 150 in the final over.(PTI)

Man of the Match: Irfan Pathan

Not sure why Kevin Pietersen wants to retire from Test cricket: Mike Gatting