He might be donning the UAE jersey, but Rishabh Mukherjee has his eyes set on representing India in the future.

He might be donning the United Arab Emirates (UAE) jersey, but rookie offspinner Rishabh Mukherjee has his eyes set on representing India in the future. For now though, he is eager to shine for the UAE at the U-19 World Cup next year to further fuel his dream.

Born in a northern pocket of the city, 18-year-old Rishabh moved to Dubai with his family at the age of five. Son to a father who also played cricket but could not realise his dream, Rishabh broke into the UAE U-19 side and helped them qualify for the World Cup earlier this year, followed by the Asia Cup.

In the ongoing Asia Cup in Sri Lanka, Rishabh had six wickets in three matches even as UAE bowed out of the competition, failing to win a single game.

With the World Cup now slated to take place in January next year in South Africa, Rishabh wants to continue his good show with the ball and take baby steps towards achieving his ultimate desire of playing for the Men in Blue.

“My dream is to play for India. I wish to move back to Kolkata and try and get into the Bengal team by getting into a first division club after the U-19 World Cup is over. I am ready to start all over again. I have spoken to many coaches back home and they have encouraged me,” Rishabh told IANS from Katunayake.

With the family staying in Dubai since 2006, Rishabh could get into the cricket team without hassle after impressing the selectors in the Inter Academy League in Dubai earlier this year.

“I was actually preparing for club cricket because I was planning on going back to Kolkata. And for the last two years, I’ve been working very hard. Luckily I performed in the Inter Academy League with the ball and got called into the UAE U-19 camp.

“In the camp, there were two selection games in which I took five wickets in one and four wickets in the other. All this happened in February.”

Rishabh was drafted into the UAE U-19 side that took part in the World Cup qualifiers in Kuala Lumpur (Malaysia) in April.

“I took nine wickets there in five matches. We qualified for the World Cup,” he said.

“In the four games I played, I grabbed seven wickets. I did not bowl in one game.”

Rishabh was interested in football initially, but bouts of asthma did not allow him to pursue the sport. “I couldn’t do that so my dad asked me to try cricket. From there I joined the school team. My dad (Pradipta Mukherjee) used to play professional cricket when he was a teenager, but couldn’t achieve his dreams.

“He wants to see me and my brother play the highest level of cricket which was his dream. Basically he wants to live his dream through us. So all these things inspired me to start and continue to play cricket,” said Rishabh, who idolises Australian offspinner Nathan Lyon and will soon be starting his classes at Manipal University in Dubai.

“I’m not a big fan of variations, I personally think off spin can be bowled in different ways and Nathan Lyon does that the best.” 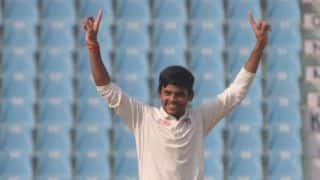 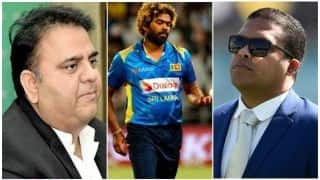 No truth to reports that India influenced SL players not to play in Pakistan: SL Sport Minister