Jacques Kallis led the run-chase with a calm 54 not out.

Kolkata Knight Riders have made it through to the final of the Champions League T20 (CLT20) 2014 with a seven wicket victory over Hobart Hurricanes at Hyderabad. It is going to be an all-IPL CLT20 final with Kolkata facing the winner of the Kings XI Punjab and the Chennai Super Kings game.

The odds were stacked against Hobart with all the spinners in the Kolkata line-up. And, they were dented before the start as Tim Paine was ruled out due to illness and Dom Michael came in his place. Xavier Doherty captained and elected to bat on winning the toss.

The start was a laboured one for Hobart as they struggled to get going. Andre Russell was the only pacer who bowled during the innings and he started things off by dismissing Michael early. Hobart then had to deal with a big blow as Aiden Blizzard, their leading run-scorer in the CLT20 2014, was given out leg-before first ball off Yusuf Pathan. The ball had clearly taken the inside edge.

Ben Dunk tried his best and played quite freely with Shoaib Malik holding one end. And when Dunk was dismissed, they ad 46 runs, with Dunk scoring 39 off those. Wickets kept falling at regular intervals as the spinners kept a check on batsmen. Malik fought hard and found the odd-boundaries. In the penultimate over, he smashed 21 runs to help Hobart push and he finished with an unbeaten 66 to take them to 140 for six.

This score wasn’t going trouble Kolkata, but they lost Gautam Gambhir early. Robin Uthappa followed a few overs later. However, Manish Pandey and Jacques Kallis kept pace and put up a 53-run stand. Yusuf Pathan walked in then and a few quiet overs put the game in the balance. That was too late for Hobart as a few big hits released the pressure and Kolkata got home in the last over. With six needed off the last over, Kallis pulled one to fine-leg. Ben Hilfenhaus nearly took the catch but tipped it over the bar. Some drama! 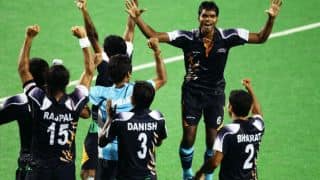