Defending champions, Kolkata Knight Riders (KKR), take on Delhi Daredevils (DD) in Match 42 of the 2015 Indian Premier League (IPL) 2015 at the historic Eden Gardens Stadium in Kolkata on Thursday. Both the teams would be playing their 10th game of the tournament and would definitely look to win the tie and continue their domination at home. A win will keep them in third place might still have an outside chance of finishing at the top. Wasim Akram hopes Pakistan, England can play in future editions of IPL

As the points table tells the story, KKR dominates the third spot with 11 points, with five wins, four losses and a wash-out. While DD sits at the sixth spot, with four wins and six losses, a win here for Delhi would ensure that they stay in contention for the fourth spot. KKR have been extremely inconsistent in the IPL 2015 so far . They have never managed to win a string of games in a row and have never had the momentum. But a win against DD will still keep them in third position in the table

Their performance in the last game against Sunrisers Hyderabad (SRH), four of their key batsmen played a big role, scoring above 30. The bowlers too did an impressive job,claiming a wicket each as they beat SRH comprehensively by 35 runs, in a low scoring tie. VIDEO: KKR win over SRH was set up by Umesh Yadav’s first over

DD, on the other hand, this year, have been off to a good start, but are of late on  a losing streak. The last match saw them losing against former champions, Mumbai Indians (MI) by five wickets. Yuvraj Singh was the lone star performer, as he finally played a good innings, following a series of low-scoring knocks. His 57 off 44 deliveries, followed by skipper, JP Duminy’s 28 and few other contributions led DD to a modest total of 152. However, the bowlers couldn’t do the job enough to restrict MI.

Considering that the game being played at the historic Eden Gardens in Kolkata, the traditional slow track would come into play once again, and KKR is most likely to go in with an unchanged squad as skipper Gautam Gambhir will not to mess with the winning combination. Sunil Narine’s unavailability will mean that Brad Hogg retains his place. Hogg has been impressive right from the first game he played. There would again be a tussle between Johan Botha and Pat Cummins. Manish Pandey believes Brad Hogg, Johan Botha can fill in for Sunil Narine in IPL 2015

DD, on the other hand could make a change or two. They could bring in Manoj Tiwary for Mayank Agarwal. The result of the game is hard to predict, as both the teams have a quality side. However, with DD on a losing streak in the past couple of games. Considering the fact that KKR are playing at home, they are the favourites to win the tie. Wasim Akram hails Gautam Gambhir for Brad Hogg’s success in IPL 2015 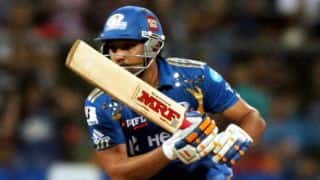