India A survived a mighty scare after Australia A pacer Jhye Richardson blew away their top order to record a five-wicket win in the one-day quadrangular series in Bengaluru on Thursday.

India A survived a mighty scare after Australia A pacer Jhye Richardson blew away their top order to record a five-wicket win in the one-day quadrangular series in Bengaluru on Thursday. After bowling out the visitors for 151, India were reduced to 29/4 before Ambati Rayudu (62) and Krunal Pandya (49) saw them through, reaching the target in 38.3 overs.

Richardson revived his team of a victory with the new-ball when he had removed Ravikumar Samarth (4) and Sanju Samson (0) off consecutive deliveries. Samarth was caught by Michael Neser while Samson was cleaned up for a first-ball duck. He then added the scalp of Suryakumar Yadav in his next over to leave India a tottering at 21/3.

After the innings break, spinner Ashton Agar landed a big blow when had captain Shreyas Iyer hole out to Peter Handscomb for 4.

Then Rayudu and Krunal joined hands to steer their team out of the trouble with a 109-run stand and recorded nine fours and a six between them.

Australia A though made a promising start with 26 runs in three overs before Mohammed Siraj (4/68) provided an early breakthrough in D Arcy Short (15). 20-year-old pacer Khaleel Ahmed then removed Usman Khawaja (13) as the visitors lost their openers inside 10 overs. They kept on losing wickets regularly.

No. 7 batsman Ashton Agar was their top-scorer with 34 off 40 followed by captain Travis Head who hit 28. Spinner Krishnappa Gowtham ran through their middle order, claiming the scalps of Head, Handscomb (2) and Matt Renshaw (7). Mitchell Swepson who struck two fours in his 15 took them past the 150-run mark before falling as the last man.

After a short break, the match resumed and India overcame an early hiccup to prevail at the M.Chinnaswamy Stadium. 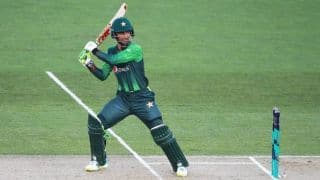 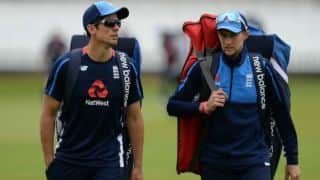