"This is probably my last year and a bit in international cricket and I would like to play county cricket again."

Celebrated Sri Lanka batsman Kumar Sangakkara refused to rule out a return to Durham after being unveiled as the English county side’s latest overseas signing on Wednesday. The left-handed batsman has agreed a short-term two-and-a-half-week contract to join the reigning county champions, but hinted that he is open to a more long-term return in future.

“If I can have another year here, where I can be successful, I would love that. The real key is the relationships that you build up over time. Durham were one of the few counties with an opening for an overseas player. I was pretty lucky they agreed to take me on, because two games is sometimes not viable for a county. Coming here, the conditions are really challenging if you’re looking to learn, but this is a great place to come,” said Sangakkara, who helped his country to lift the World T20 crown earlier this year.

Sangakkara will make his Durham debut in the four-day game against Yorkshire in the County Championship on Sunday. His second and final game is against Sussex at Hove, starting the following weekend.

The short-term stay provides ideal preparation for Sri Lanka’s forthcoming Test and one-day international series against England, which starts at the end of May.

The 36-year-old Sangakkara, who is ninth on the list of all-time Test run scorers with 11,151 at an average of more than 58, added: “It’s important that I keep my focus on the present, and make an impact against Yorkshire.

“Of course I’ll have the preparation for England at the back of my mind, but it’s important to be focused on current events. Playing against England for us has always been a challenge. We don’t have the pace and firepower of the English, Australian, South African and even Pakistani attacks, but to be fair, we have a lot of variety in our bowling.

“We have guys who can swing and seam, and others pushing into 140 kilometres per hour. Back in 2006, when we toured here, it was a pretty successful time, drawing the Test series 1-1 and winning 5-0 in the one-dayers. “To win a Test series here in England, that’s a real dream.” he said. Sangakkara, who came close to joining Lancashire in 2010, enjoyed his only previous spell in English county cricket, with Warwickshire in 2007. “It was one of the best experiences I’ve had as a cricketer,” he said. “The dressing-room atmosphere and the general professionalism of the players left a lasting impression on my mind.

“This is probably my last year and a bit in international cricket and I would like to play county cricket again.” Sangakkara caused amusement during Wednesday’s press conference at Durham’s Chester-le-Street ground after revealing that he was late after getting lost on the way there.

Having been beset by satellite navigation problems as he travelled from his temporary base in nearby Durham City, he explained: “I had to apologise for turning up late. “For some reason I seemed to end up on the motorway on my way to the ground, which clearly wasn’t the right way, but I found myself here in the end.”

Durham coach Jon Lewis acknowledged that the county could stand accused of playing one of Sri Lanka’s top players into form ahead of their meeting with an England side keen to move on from the memory of a tortuous winter tour of Australia.

“I understand that criticism might come our way, but this is about doing the right thing for us,” he said. “We’ve lost a couple of batsmen and with the injury to Ben Stokes, it’s left a bit of a hole.

“So to have Kumar available for a couple of games is a big plus. There’s never a wrong time to bring in someone of Kumar’s experience and it’s good to have a senior guy in there who has played a lot of cricket.” 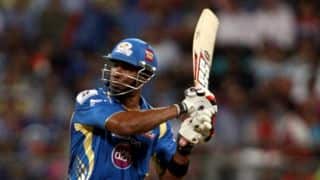