Kumar Sangakkara’s brilliant hundred under pressure lifted Sri Lanka to 289 for six against Bangladesh in the second One-Day International (ODI) at Dhaka. The hosts yet again, drew first blood, taking two wickets quickly before handing over the advantage to the Sangakkara and co.

Rubel Hossian provided Bangladesh with a dream start, sending the strokemaking openers Kusal Perera and Tillakaratne Dilshan back to the pavilion, both the batsmen holding out trying one shot too many to clear the infield.

Dinesh Chandimal was the next to go, once again failing to an impact,  playing a tame shot that found the leading edge off the bowling of Sohag Gazi and the score at this point was 58 for three.

Rookie batsman Ashan Priyanjan came in provided ample support to the superb Sangakkara. The veteran Sri Lankan batsman was the one doing all the damage while Priyanjan was just hanging around cautiously, rotating the singles and waiting for the right opportunity to attack at the other end.

The two batsmen’s brilliant counter-attacking batting meant that honours were back in favour of Sri Lanka in the match. The duo reached their half-centuries and were looking set before Shakib Al Hasan put the brakes on the scoring, dismissing Priyanjan for a well made 60.

Sri Lankan captain Angelo Mathews came in and took no time settling in, going after the bowlers from ball one. Sangakkara meanwhile had brought up yet another hundred in what has been a prolific tour.

Arafat Sunny, in what was a model display of death-overs bowling, god rid of Sangakkara for 128 and  gave away a measly nine runs in his two overs. Sadly, the other bowlers and especially the fielding was a big let down for the home team. Mahmadullah dropped a sitter of Mathews and there were four other drop catches that might go on to cost Bangladesh.

There were more drop catches and misfields as Mathews’ big hitting took Sri Lanka to a commanding 289 for six in their 50 overs. 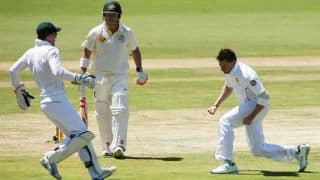