Kusal Mendis scored a run-a-ball 69 and contributed towards Sri Lanka's victory against Australia in the first ODI.

Kusal Mendis has been in a great form in the ongoing Sri Lanka vs Australia series and has received many appraisals and now it is the Lankan captain who has praised his teammate. Looking at the talent the player has and the way he has been performing, Mathews recently said that Mendis is the future of Sri Lanka’s batting line up. Sri Lanka has been in the building phase post the retirement of Kumar Sangakkara and Muttiah Muralitharan but the home series against Australia came as a game-changer to the team as they posted a historic victory in the Test series. FULL CRICKET SCORECARD: Sri Lanka vs Australia 2016, 2nd ODI at Colombo

Talking to espncricinfo.com, Mathews said about Mendis’ knock in the second One-Day International (ODI) against Australia, “He’s going to be a big player for us. He’s going to be the future of our batting. If he keeps going like this he will do wonders for the Sri Lanka team and I wish him all the very best. It was a fantastic knock today.

“He’s just very positive. Especially after losing a couple of wickets in quick succession, the way he went out there and the way he batted was brilliant. Not too many people do that – you take a bit of time and settle in and take a look at the wicket. But he’s just going out there and playing with a lot of freedom. He’s just a different kind of player.”

He also spoke about Dinesh Chandimal. “Chandimal’s been tremendous for us in the Test series and also in England. He’s matured. He’s also playing with a lot of responsibility – as a senior. He’s anchoring the innings and that’s what we want from him. Him batting at No. 4, we want him to bat until the 46th over, so that guys like Kusal Mendis, Kusal Perera and Danushka Gunathilaka can go out there and play with a lot of freedom. In our batting line up myself and Chandimal have to take the responsibility to let the youngsters play with freedom.” 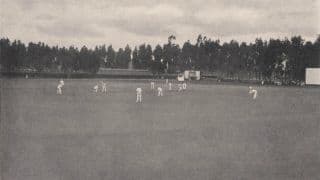