Kusal Perera and Dinesh Chandimal led the way during the visitors chase.

After Sri Lankan bowlers did a fine job restricting Bangladesh to 240 for eight, openers Perera and Lahiru Thirimanne, coming back into to the side after a lengthy spell on the sidelines, started steadily, with Perera, predictably doing the bulk of the scoring.

Mahmudullah’s double strike after the Lankans were cruising at 44 for no loss put the visitors in a spot of bother. Thirimanne gave his wicket away cheaply, chipping it into the safe hands of Shamsur Rahman and Kituruwan Vithanage was foxed of a lovely delivery that crashed into his middle stump, leaving Sri Lanka at 64 for two.

Chandimal, desperately needing an innings of substance with the help of the swashbuckling Perera took charge of the situation to blow the hosts out of water. Perera’s first-fifty was a rather patient innings by his standards while Chadimal on the other end looked like a man possessed, eager to make use of the dead rubber as a perfect way to get back to run-scoring ways.

Perera was a treat to watch, rotating the strike early on but going for the big hit whenever an opportunity presented itself. The second fifty of his en route to his century saw many big sixes, establishing his growing reputation as one of the openers to watch out for in the future. Perera reached his maiden hundred soon but was out trying to clear the ropes, guilty of playing the slog sweep one time too many. Rubel Hossain was the bowler and the wicket brought curtains to a 130-run partnership. Chandimal also perished soon after to the bowling of Rubel, failing to connect to a faster one and nicking it to wicketkeeper Anamul Haque.

Ashan Priyanjan and skipper Angelo Mathews ensured that Sri Lanka reached the target without further hiccups, biding their time before Mathews finished proceedings off with a big six of Naeem Islam to complete a whitewash in the ODI series. 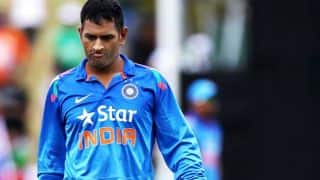