Sam Curran provided a much needed final flourish for Kings XI Punjab with an quickfire 55 off 24 balls, to help KXIP to 183/6 against Kolkata Knight Riders in Match 52 of IPL 2019 at the IS Bindra PCA Stadium, Mohali on Friday.

Sam Curran provided a much needed final flourish for Kings XI Punjab with an quickfire 55 off 24 balls, to help KXIP to 183/6 against Kolkata Knight Riders in Match 52 of IPL 2019 at the IS Bindra PCA Stadium, Mohali on Friday.

After Nicolas Pooran and Mayank Agarwal had revived KXIP’s innings that stuttered early on with the quick wickets of KL Rahul and Chirs Gayle, the lower-order of KXIP put in handy contributions, as 68 runs were scored in the last six overs, with 32  runs coming in the final two overs bowled by Andre Russell and Harry Gurney.  Gurney’s last over was taken for 22 runs with the sequence being 2,2,2,4,6,4.

Pooran gave a good account of himself an 27-ball blitz, racing to 48 runs, but was undone by the part-time spin of Nitish Rana, caught at deep midwicket by Sandeep Warrier. However, Pooran innings ensured that KXIP’s run-rate was up and running as they reached 115/4 in 14 overs, when the second strategic time-out was taken.

Pooran and Mayank Agarwal added 60 runs in just 6.4 overs, with Pooran doing the bulk of the scoring, hitting three fours and four sixes. But, Dinesh Karthik’s bowling change in the form of Rana in the 11th over reaped rewards as Pooran failed to time a short of length ball and was caught in the deep.

Two overs later, KXIP lost Agarwal to a run-out after he had scored 36 off 26 balls. Rinku Singh’s from deep midwicket was palmed on to the stumps by Sunil Narine.

KXIP lost the in-form KL Rahul and Chris Gayle early and managed to post 41/2 in the powerplay over.

Kerala’s Sandeep Warrier, playing only his second game of the season, made the two telling blows by removing Rahul in his second over and then added the scalp of Gayle in his third. Rahul was foxed by a slower one and was caught at mid-on, while Gayle clipped a half-tracker straight to Shubhman Gill at deep square leg. 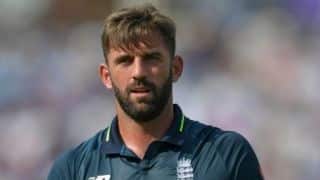