Kaitak's, the runners-up of previous edition, have two points.

Ryan ten Doeschate s all-round show failed to seal a win for Hong Kong Island United as City Kaitak registered a 26-run win in the second game of Hong Kong T20 Blitz 2018. Skipper Ryad Emrit, who was taken aback by the chilly conditions, on Tuesday, led from the front in the second match, claiming 4 for 34. Aizaz Khan, who scored a fifty in losing cause for Kaitak’s, got 2 for 29.

However, Kaitak s openers Anshuman Rath and Kyle Coetzee set up the win with a century stand in first 10 overs that helped Kaitak pile up 195 for 4. Both these men were dismissed in within the first two overs in the first match. Coetzer went on to slam his first century in the 20-over format.

We weren t looking for a total and just batted with freedom. In the end 195 was defendable. We are taking it game by game. In short tournaments like this we can t really took too far ahead, said Hong Kong opener Rath.

Coetzer was smacked on the ribs early by a rising delivery from Mohammad Irfan early on but he didn t let the Pakistani giant intimidate him further.

Quite proud (to get my first hundred). Good to have so many international players here. Early in the day, Irfan gave me a wake up call hitting my ribs. The pitch will improve as the tournament progresses and it gets more sunshine, said Coetzer after the match.

United were off to a brisk start but they kept losing wickets at regular intervals, first Luke Rochi and then Kamran Akmal.

Ten Doeschate kept them in the hunt till late but flurry of wickets did not help. Skipper Tanwair Afzal s 7-ball 21 and Ashan Abbasi s 18-ball 32 provided some entertainment to the decent turnout at Mission Road Ground.

San Francisco-born Jason Lui fell for a first-ball duck to Emrit as United folded for 169. Lui is the first Hong Kong Chinese player to bat in the Blitz.

Earlier, Kaitak made amends for their lacklustre show with the bat on Tuesday by posting 195 for 4 in their 20 overs. Openers Rath and Coetzer set the platform.

Coetzer, who was the second-highest run-getter in the tournament last year (254 runs at 50.8 and at a strike rate of 157), continued his love affair with the tournament.

After Rath, Ravi Bopara supported the Scotland star with a 69-run stand before exploding at the end. The final over from David Weise cost the United 18.

Kaitak’s, the runners-up of previous edition, have two points.

Man of the Match: Kyle Coetzer 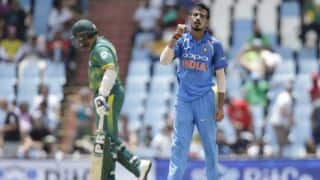