After 10 overs, Lahore only scored 53 for the loss of four wickets.

Lahore lions made a bad start of their match against Dolphins on a slow Chinnaswamy track. They lost both openers, Ahmed Shehzad and Nasir Jamshed cheaply. Robbie Frylinck took those two wickets. In the sixth over Agha Salman, who got his chance in the match, lost his wicket to Kyle Abbott. Captain Mohammad Hafeez who was expected to take control of Lions innings also got out to Cameron Delport. After 10 overs, Lahore only scored 53 for the loss of four wickets. Umar Akmal and Saad Nasim were at the crease. 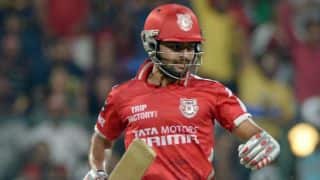 Manan Vohra: Yograj Singh and Sanjay Bangar helped me with the short deliveries