Mumbai: Lalchand Rajput, head coach of Afghanistan which has been granted Test status by the International Cricket Council, heaped praise on the country’s impressive leggie Rashid Khan and compared the bowler’s raw talent to that of cricket icon Sachin Tendulkar. “He (Rashid) is the new kid on the block. He has natural abilities. There are certain people who have got natural abilities, like Sachin (Tendulkar) who was born to rule cricket. This boy definitely will rule the bowling. He is one of the pillars of Afghanistan cricket,” Rajput told PTI here. “He bowls with pace and batsmen find it difficult to pick him,” the former India Test opener said.

The 18-year-old leggie was the cynosure of eyes during the last Indian Premier League edition where he played for the Sunrisers Hyderabad and grabbed 17 wickets in 14 matches to become the second-highest wicket taker in his team behind India pacer Bhuvneshwar Kumar. Rashid had made his debut for Afghanistan against Zimbabwe in October 2015. Rajput, however, advised the Afghanistan youngster to keep working hard and not become complacent.

“Because such type of bowlers come and fade away also. A classic example is of Sri Lankan Ajantha Mendis. When he came on the scene nobody was able to pick him, but after a few years batsmen started reading him and he is nowhere now,” said Rajput, who is one of those who has applied for the Indian team’s head coach’s job.

He said it was a good thing that at an early age Rashid got a chance to play in the IPL and must have got an inkling about the nuances of playing against better players. Rashid has grabbed 63 wickets in 29 ODIs, with 7 for 18 haul against the West Indies in the recently concluded series in the Caribbean islands that ended 1-1 as his best. Rajput also expressed his glee over Afghanistan getting full Test status.

“It is a great moment for all of us and that country. It is a great thing for the people of that country,” said Rajput, who has been associated with the Afghanistan team for the past one year. Afghanistan were yesterday made full members by ICC along with Ireland, thereby granting both of them Test status. 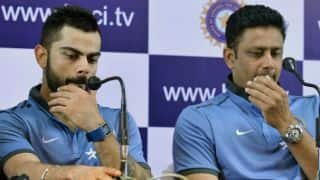 Anil Kumble gave an earful to Team India, in dressing room, after their defeat against Pakistan: Reports 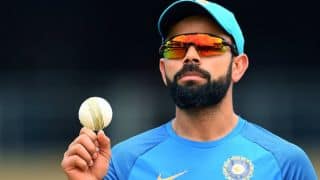 No need of a coach if Virat Kohli thinks he is the boss: Erapalli Prasanna