Niraj Gunde alleged in a letter to BCCI that Lalit Modi has a beneficial interest in at least three yet unnamed IPL teams.

Niraj Gunde, who has taken over from Amit Verma as something of a watchdog against the Board of Control for Cricket in India (BCCI), has alleged that former Indian Premier League (IPL) chairman Lalit Modi has a “beneficial interest” in at least three yet unnamed IPL teams. Gunde wrote in a letter of complaint to BCCI that the former vice president of BCCI and current Rajasthan Cricket Association (RCA) president was involved in discussions that seem to point toward Modi having a “beneficial interest” in IPL teams.

As reported by Cricbuzz, Gunde wrote in his letter of complaint, “Lalit Modi, former BCCI vice president, chairman of IPL governing council and current President of Rajasthan Cricket Association (RCA) was expelled by the BCCI in 2013 after the disciplinary committee found him guilty of several acts of indiscipline and corruption. While this has been in the public domain and IPL chairman Rajeev Shukla has informed that appropriate action would be taken after ascertaining facts, no action was initiated by the BCCI. The relevant mails between Dean Kino, lawyer of Lalit Modi and Sameer Modi (Lalit’s brother) — where they discuss the beneficial interest in three IPL teams — are also attached with the complaint letter.”

Kino was the Champions League T20 (CLT20) Governing Council chairman. Gunde further said in his letter, “Discussions between the parties (Kino and Modi siblings) indicate that Modi is a beneficial owner in three teams. This needs further investigation. There appears to be a cover-up by the BCCI and dereliction of duty by the current office bearers to protect Modi and other criminal elements in IPL.” 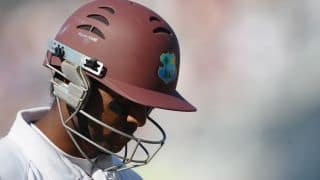 Shivnarine Chanderpaul: WICB treatment towards me will be not yield good sign for youngsters