England are six down in their first innings and lead by 63 runs.

From cruising with two wickets down and having two set batsmen at the crease, a late burst in the day by the Sri Lankan seamers with the second new ball reduced England to 320 for the loss of six wickets by the end of Day Two in the second Test at Headingly. An inspired late spell by Shaminda Eranga and Angelo Mathews meant England are effectively 63 for six at this stage in their first innings.

After a wonderful maiden ton Sam Robson, and two equally important fifties by Gary Ballance and Ian Bell, England face themselves in a situation where this game in no longer comfortably in their hands.

Earlier in the day, resuming their innings at the overnight score of 36 for no loss, Alastair Cook and Robson started off well, rotating the strike and also hitting a couple of boundaries. But the partnership didn’t last long on Day Two morning as Cook went hard at a wide delivery outside off from Dhammika Prasad, got the edge which was safely pouched by Kumar Sangakkara at third slip.

Cook’s wicket brought centurion from last match, Gary Ballance to the centre. Both Ballance and Robson stitched a fifty-plus partnership in the first session, and looked assured in the middle. Robson was the more stroke-making of the two, and also brought up his first fifty in Test cricket.

Then, resuming after lunch, the two batsmen carried off from where they left off in the first session. Ballance opened up more as the boundaries started to come off his bat. Robson, on the other end, was cautious and calculated at the other end as slowly progressed towards a hundred in his debut series. Ballance though survived a close call early in this session when he was trapped on the pads by Rangana Herath. It was a loud appeal, the umpire was convinced and raised his finger. But Ballance reviewed the decision, and replays showed that he was justified in doing so. That ball was spinning past the leg stump.

Ballance then went on to score another fifty. The two batsmen also brought up the 100-run partnership over the course of the session. While Robson stitched a flawless innings, Ballance again survived when he was dropped in his 60s by Kaushal Silva at short-leg. But he couldn’t ride his luck and score consecutive hundreds as he fell to Sri Lankan captain, Angelo Mathews just half an hour before tea. Mathews bowled a gentle seam up delivery which angled across Ballance, and the left-hander poked at it to hand an easy catch to Dinesh Chandimal. Ballance’s dismissal brought Ian Bell to the centre, who is playing his 100th Test for England. Bell and Robson then saw off the session without any further hiccups.

The pair then resumed for the last session of the day. Robson took very little time to get the monkey off the back as he drove through the covers for a couple and brought up his maiden Test ton in his debut series. While he simply acknowledged the crowd, the jubiliation in the faces of parents marked the true essence of his special knock.

Bell, on the other end, looked positive from ball one. At regular intervals, he glided the ball between the slips and gully for boundaries. Sri Lanka didn’t delay much in taking the new ball after Tea. And they soon reaped the rewards. Just when it seemed Bell and Robson will strengthen the English lead considerably, Robson lost his off-bail to a sharp inswinger from Pradeep. Bell continued in his positive fashion, and soon brought up another Test fifty.

And just when it seemed Bell might join the exclusive league of players who have hundreds in their 100th Tests, he fell to an obnoxious delivery from Shaminda Eranga which was going down the leg side. He tried to slide it for four, instead got a feather of a touch on it, and Chandimal did the rest.

Suddenly, Sri Lanka had come back into the match. Suddenly, there were two fresh batsmen in the centre in the form of Joe Root and Matt Prior. And the nightmare worsened. Skipper Mathews came back into the attack. And he struck again. This time the victim being Joe Root. Root hung his bat to what seemed like a harmless delivery outside his off-stump, got the edge, and again Chandimal made no mistake in pouching the chance. Suddenly, England had lost half their side with the lead just over 50. Their dominance in the Test had slipped, and their comfort was shaken and stirred by some inspired bowling from Pradeep, Eranga and Mathews.

England then sent nightwatchman Moeen Ali to see off the worrying period alongside Prior. But it was not to be. Ali again edged one outside his off-stump, and Chandimal again did the rest. England six down. From being two down with a centurion and a fifty-up 100th Test-man in the middle, they were six down before Robson could have had some massage on those aching forearms.

Chris Jordan then joined a worried Prior in the middle, and survived the remaining overs. A day which England would have liked to believe was theirs, but it would be the Lankans with their tail up on Day Three morning. 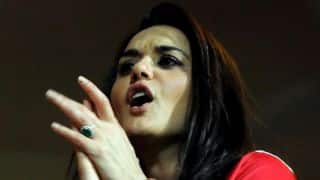