England stand-in Twenty20 captain Graeme Swann has warned his side they must learn the lessons of Sunday's defeat by the West Indies or they will struggle to defend their World Twenty20 crown. 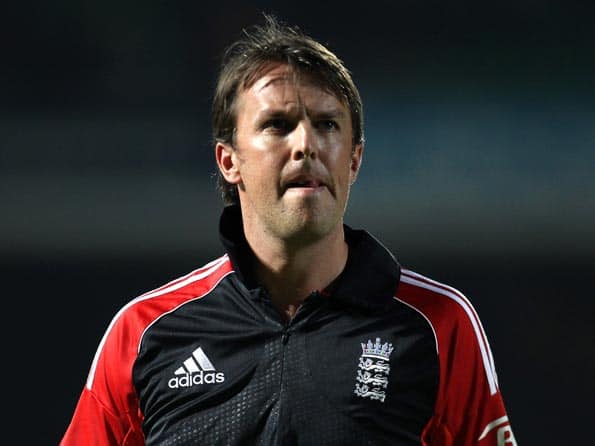 Chasing 113, England were bowled out for just 88 on Sunday at The Oval, their lowest total in T20 games in T20 Getty Images

England stand-in Twenty20 captain Graeme Swann has warned his side they must learn the lessons of Sunday’s defeat by the West Indies or they will struggle to defend their World Twenty20 crown.

On a turning pitch at the Oval England, chasing 113, were bowled out for just 88, their lowest total in T20 games, and went down by 25 runs with rookie spinner Garey Mathurin taking 3-9.

Swann anticipates England playing on similar pitches in the upcoming one-day series in India and in next year’s World Twenty20 in Sri Lanka and insists England will have to draw on Sunday’s experience in the subcontinent.

“It’s completely unacceptable (to be unable to chase down 113) and won’t be allowed to happen again. You can look at that cloud and give it a silver lining if you like.

“Everyone will be honest in this team. They will hold their hands up and look at their dismissals and say ‘I did something wrong there that I shouldn’t have done’.

“If you don’t have someone putting their hand up and winning the game, if all 11 of you don’t bother putting your hand up then it’s going to be very difficult.

“It’s just a case of knowing what we have done wrong and making sure it never happens again. I don’t think I ever want to play in an England team that can’t chase 113 against any opposition.

“West Indies bowled and fielded well, but there shouldn’t really be any team in world cricket who can keep a team down to 113, in my opinion.

“It’s a harsh environment in international cricket and you find out a few things about people when they are under the pump.

“Today, one or two guys didn’t respond that well, but I’m sure, knowing this team as I do and the way they have trained, it’s a mere blip. I wouldn’t write off any of this XI who have played tonight, or indeed any of the 14 in the squad, because they are all superb cricketers.”

One of the few players to emerge with credit was the leg-spinner Scott Borthwick who took his first wicket on his debut and was batting well before being run out.

The series ended 1-1 after England had cruised to a 10-wicket win on Friday at the same venue.(AFP)

Champions League T20 has got off to an encouraging start

Tiger Pataudi and his love for ghazals & thumris