Lendl Simmons was the star performer for Mumbai Indians against Royal Challengers Bangalore in Match 16 of IPL 2015.

Mumbai Indians (MI) finished with a par score against Royal Challengers Bangalore (RCB) in Match 16 of the eight edition of the Indian Premier League (IPL) 2015 at Bangalore. They posted 209 for seven at the end of 20 overs. It was due to the superb 72-run stand between Lendl Simmons and Unmukt Chand that set the innings up for Mumbai.

Mumbai got off to a good start with Lendl Simmons taking up the charge. Parthiv Patel departed for another low score but Simmons kept playing his shots to get Mumbai to 48 for one at the end of six overs. Patel was also David Wiese’s maiden wicket in IPL. Chand came in and started to find the gaps and kept the scoreboard ticking as Mumbai set the platform up.  LIVE UPDATES: Royal Challengers Bangalore vs Mumbai Indians

Simmons was quite superb, picking up right balls to go after. He returned to form with a hard hitting and quick fifty as the RCB bowlers were poor in their lines and lengths. He scored his fourth IPL fifty and brought it up in just 36 balls. Yuzvendra Chahal was the bowler who dismissed Simmons who top edged a sweep for a good catch from Varun Aaron. Rohit Sharma coming signaled his intents right away hitting a four and six in his first five balls at the crease.

Chand continued to be impressive as he was very aggressive and his stroke-play had all eyeballs glued to him, he has been touted him as the next superstar and he showed a glimpse of what can be expected from him in the coming future. He hit his maiden IPL fifty with a superb squeeze through third man for a boundary. Chand was out trying to hit out Chahal but found Kohli at long off. LIVE SCORECARD: Royal Challengers Bangalore vs Mumbai Indians

Rohit had scored a double hundred at the very same ground and when he swept Abu Nechim for a six over mid-wicket from outside off, it stamped the reason why he is often talked about as the best finisher in limited overs format. David Wiese came back to bowl his final over and picked up three wickets in an over dismissing Kieron Pollard, Ambati Rayudu and Rohit who got out for a well made 42 but Mumbai had enough on the board by then. Even Hardik Pandya playing his first IPL game, hit a couple of sixes to take his team past 200.

RCB were poor overall with the ball and never managed to put pressure on the Mumbai batsmen. David Wiese had a superb day taking four for 33 but three of his wickets came when the batsmen were throwing their bats around for quick runs. Chahal was impressive taking two for 28. They bat deep but also have a big score to chase down. Mumbai will hope their bowling steps up today and they finally win a game in IPL 2015. Virat Kohli and co. have a stiff target to chase, but if any team has the line-up to do so, they do.

RCB had earlier won the toss and put Mumbai in. Both teams made wholesale changes. The most notable one was of Corey Anderson missing out for Mitchell McClenaghan. Mumbai making four changes was easy to comprehend since they had lost four games in four matches but RCB making so many of them was surprising. It was also the 100th IPL game for Harbhajan Singh for Mumbai Indians. Indian Premier League (IPL) 2015: Complete coverage 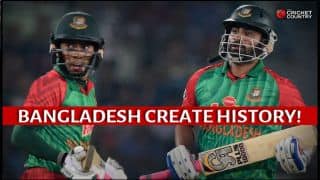 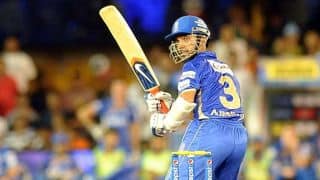