Liam Dawson helped Hampshire put on 84 in 34.2 overs for the first wicket with Jimmy Adams

Hampshire and England all-rounder Liam Dawson, who was also a part of the recently-concluded Twenty20 International (T20I) series against South Africa, believes the pink ball creates boring cricket. Dawson, who scored his first fifty in the ongoing season of English County Championship, had to dig in hard to score his runs. He helped his team put on 84 in 34.2 overs for the first wicket with Jimmy Adams (47), before the latter was caught at slip on the bowling of Craig Overton.

If you look at the score we were 80 for none but we didn t score quickly, said Dawson, who faced 139 balls and scored mere four boundaries. If you are prepared to be quite boring I think that is what we are going to have to do. We are short of runs. It is the sort of wicket where you can be boring and take the game deep.

Dawson s first impressions of Day-Night Championship cricket were not favourable after Hampshire made 211 for 9 declared, having collapsed to 172 for 7.

The crowds haven t changed; we haven t had any more people in. It is early days and it is something that might work. From my first experience of it, I think they need to have a good look at what balls they are going to use. If you are going to keep on using those balls then you are going to get some pretty boring cricket. It just goes very soft, very quickly. We are behind the game but this is a new game for everyone and if we get a few quick wickets then who knows what will happen, added Dawson.

Somerset fast bowler Overton also seemed to be quite unhappy with the pink ball: “The ball was strange. It swings and then goes really soft. It didn t really do much,” he said. 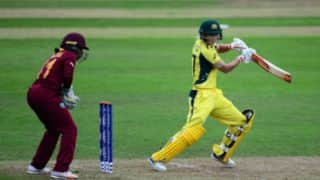