Hello and welcome to Cricketcountry's live coverage of ICC World Cup Qualifiers 2018. Ireland and Afghanistan clash in a virtual semi-final with 2019 World Cup spot at stake.

Hello and welcome to Cricketcountry’s live coverage of ICC World Cup Qualifiers 2018. As we head to the penultimate game of the tournament, we still do not have the second team who has made it to the 2019 World Cup. The fact illustrates how competitive and thrilling the tournament has been.

Afghanistan taking on arch-rivals Ireland at Harare was touted to be a dead-rubber. The game now is a virtual semi-final, with the winner finding themselves a spot in the 2019 World Cup.

Afghanistan played in the 2015 World Cup and their rise in the recent past has been most impressive. Meanwhile, Ireland have played the last three editions of the World Cup and every time they have pulled off an upset. They beat Pakistan in 2007, England in 2011 and West Indies in 2015.

West Indies are the only side to have qualified for the 2019 World Cup after notching up a close win against Scotland by DLS method. The winner of today’s match will be through and play West Indies in the final.

Afghanistan have enjoyed an upper hand against Ireland in the recent past. However, when it comes to the overall head-to-head, Ireland holds the edge. In the 16 ODIs played between the two, Ireland have managed 9 wins whereas Afghanistan have 7 to their name.

(Trivia: Afghanistan have 7-3 advantage over Ireland in T20Is)

On Thursday, Zimbabwe suffered a shock defeat in the hands of UAE and blew their chances away. At one stage, they were comfortable with five points but back-to-back losses have dented their hopes. They still have an outside chance to make it, provided the match between Ireland and Afghanistan end in a tie. Zimbabwe have been a part of every World Cup since 1983.

If Afghanistan make it, it won’t be anything short of a fairytale, especially after losing the first three games and being on verge of exit from the group stage.

(Interesting numbers: The game will be Niall O’ Brien’s 100th ODI and if Rashid Khan gets four wickets today, he will be the fastest to 100 ODI wickets. Mitchell Starc holds the record with 100 wickets from 52 ODIs, this will be Rashid’s 43rd match.) 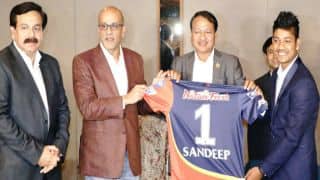 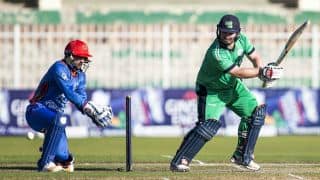