Catch all the live updates of the third match of Asia Cup Qualifiers between Afghanistan and Oman on Cricket Country.

Good Afternoon! Hello and Welcome to CricketCountry’s live coverage of first match of the Asia Cup Qualifiers between Afghanistan and Oman at Fatullah. We will be bringing to you the live updates of all the cricketing action for today’s clash. The Asia Cup 2016 tournament is going to be played in Twenty20 (T20) format for the first time in the history of Asia Cup. This tournament between the associate nations is a qualifying one as the winner of this will join India, Pakistan, Sri Lanka and Bangladesh in the main event. Both, Oman and Afghanistan are playing second match of the tournament and have witnessed different results in their previous encounter. LIVE CRICKET UPDATES: Asia Cup Qualifier 2016, Afghanistan vs Oman, Match 3 at Fatullah

Live Cricket Score, Afghanistan 168/7 in 19.3 overs | TARGET 166 | BATTING: Gulbadin Naib 4 (6), Dawlat Zadran 12 (2): And Afghanistan win comfortably with Dawlat Zadran coming in to play the final shots after wicket down of Smiullah Shenwari. Ajay Lalcheta came in to bowl his first over and got a wicket but never knew he would give huge chances to Dawlat Zadran to take the game away by those two huge sixes. Oman tried their best and pput in efforts by bring Afghanistan to 7 wickets down, but were unsuccessful in the death overs to take more wickets. Afghanistan now will proceed to the next level, while Oman have lost two games in a row. OUT! Samiullah Shenwari c Adnan Ilyas b Lalcheta 12 (9)

Live Cricket Score, Afghanistan 145/6 in 18 overs | TARGET 166 | BATTING: Samiullah Shenwari 2 (3), Gulbadin Naib 3 (5): Bilal Khan from Oman is on a roll with three wickets in his hand already. the 16th over saw two wickets fall thanks to Bilal Khan. Afghanistan require 22 runs and just 4 wickets remaining. Can they win this game depends the partnership the batsmen can withstand for longer. Noor Ali Zadran played his best at 63 was the last man to go out. Gulbadin Naib and Samiullah Shenwari are batting at the crease. OUT! Noor Ali Zadran lbw b Bilal Khan 63 (44), Najibullah Zadran lbw b Bilal Khan 23 (21)

Live Cricket Score, Afghanistan 112/4 in 13 overs | TARGET 166 | BATTING: Noor Ali Zadran 46 (32), Najibullah Zadran 13 (11): Afghanistan are four wickets down and require just 62 runs to win. This could be a win for Afghanistan with Noor Ali Zadran approaching his half-century soon. Oman has done a fairly better job restricting Afghanistan at regular intervals. They look to be more confident with their innings and wickets fallen are of Asghar Stanikzai, Mohammad Nabi. Aamir Kaleem has been the star for Oman picking three wickets. Oman will look to continue this momentum and crush the opponents at regular intervals. OUT! Mohammad Nabi c Wategaonkar b Mehran Khan 11 (12), OUT! Asghar Stanikzai c Bilal Khan b Mehran Khan 34 (23), OUT! Karim Sadiq c Adnan Ilyas b Mehran Khan 0 (1)

Live Cricket Score, Afghanistan 57/1 in 5 overs | TARGET 166 | BATTING: Asghar Stanikzai 33 (15), Noor Ali Zadran 18 (10): Afghanistan begin their innings with an early wicket down. Just three overs done and Afghanistan have lifted back from where the wickets fell for them. After Oman losing the first qualifier match, this becomes important to win. But at the rate Afghanistan are moving, victory is not too far sighted for them. Oman’s first breakthrough was given by Bilal Khan and Mohammad Shahzad was out too soon. Currently batting are Noor Ali Zadran and Asghar Stanikzai. Mehran Khan is bowling the 4th over and Bilal Khan looks comfortable to play the long shots in the innings. OUT! Mohammad Shahzad c Adnan Ilyas b Mehran Khan 3 (5)

Live Cricket Score, Oman 165/3 in 20 overs | BATTING: Mehran Khan 12 (8), Amir Ali 1 (1): Oman end their innings just as they expected with 160-plus runs on board. They continued the momentum right since the beginning and were consistent with their innings until the end. Oman were would have crossed 200-plus total had the three wickets not fallen and the opening partnership continued to create the magic. Afghanistan tried their best and managed to pick just three wickets. Afghanistan have a huge total ahead to portray their batting skills now. OUT! Aamir Kaleem c Rashid Khan b Dawlat Zadran 13 (17), OUT! Adnan Ilyas c Najibullah Zadran b Gulbadin Naib 54 (27)

Live Cricket Score, Oman 133/2 in 16 overs | BATTING: Adnan Ilyas 50 (24), Aamir Kaleem 4 (4): Zeeshan Masdooq secures half-century and Adnan Ilyas gets his first big boundary in the 13th over. Oman are in good position here and looking for 150-plus score on this pitch. Just 11 runs from that 13th over bowled by Mohammad Nabi with a huge six from Adnan Ilyas. Oman looking good with this score from here on looking to score 160-plus runs. Rashid Khan coming to bowl his third over but no luck with wickets yet. Afghanistan require wickets at regular intervals now to keep the pace moving. Adnan Ilyas is playing comfortably playing the long shots and is successfully completes his half-century in 24 balls. And Zeeshan Masdooq is OUT for for 52 and now enters Aamir Kaleem. OUT! Zeeshan Masdooq st Mohammad Shahzad b Amir Hamza 52 (42)

Live Cricket Score, Oman 73/1 in 11 overs | BATTING: Zeeshan Masdooq 47 (37), Adnan Ilyas 1 (2): Oman is playing a wonderful innings and they are half way through the innings with Zeeshan Masdooq just five runs away from his half-century. Jatinder Singh is 20 runs up and both the opening batsmen have scored 70 runs partnership already. Afghanistan seem to be helpless at the moment with the runs Gulbadin Naib has conceded 10 runs so far from 2 overs bowled. Just when we think Oman was playing some great shots, Afghanistan attacks and take wicket of Gulbadin Naib. Adnan Ilyas comes to bat. OUT! Jatinder Singh c Karim Sadiq b Gulbadin Naib 23 (28)

Live Cricket Score, Oman 36/0 in 5 overs | BATTING: Zeeshan Masdooq 26 (23), Jatinder Singh 8 (8): Oman won the toss and chose to bat first. Zeeshan Masdooq and Jatinder Singh have opened the innings for Oman. Dawlat Zadran opened the attack for Afghanistan. Starts off with an expensive over with 9 runs along with wide. The second over was Karim Sadiq who restricted the runs well with just four runs from it. Third over down and Oman are cruising through the innings. Karim  Sadiq is helpless at the moment and gave away 14 runs in 4th over with three boundaries from it and Oman looking for a grand total here against Afghanistan. Gulbadin Naib is the new man come into attack bowling the 5th over and Zeeshan Masdooq is cruising through the innings with 25 runs already while Jatinder Singh has not got an opportunity to play yet.

Oman won the toss and elected to bat first.

Oman registered a fine victory in their clash against Hong Kong as the former won the thrilling encounter by a whisker of five runs. They batted well and their bowlers ensured a scintillating victory to kick start the tournament. Their batsmen seem to be in form as all have stepped up and contributed. They would look to register another win under their belt against Afghanistan.

Afghanistan on the other hand endured a defeat at the hands of UAE as they lost the game by 16 runs. Afghanistan need to pull up before it’s as each game holds a lot of value. They will look for revival of fortunes against Oman and win the game. In order to do so their top order needs to fire as they did not make any substantial contribution in the opening game. Expect another thrilling encounter at Fatullah when these two teams lock horns on Saturday. 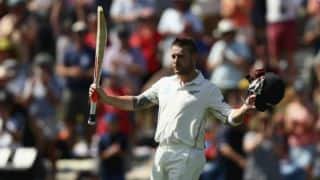