At stumps on Day 1, Assam were 21 for one and still trail Karnataka by 166 runs.

Hello and welcome to CricketCountry’s live coverage of Day 2 of the first Group A game of the 2015-16 Ranji Trophy between Assam and defending champions Karnataka at the Barsapara Cricket Stadium in Guwahati. Karanataka, being the defending champions are high on confidence as they aim to win their third title in a row following their second consecutive win last season, that would also lead to their ninth title. However, Assam, would be looking forward to their best season ahead as they have neverplayed a final in the tournament and would be depserate to make it this time. Assam lost in the quarter final last season, but would shrug it off and would look to start the new season on a fresh note. At stumps on Day 1, Assam were 21 for one and still trail Karnataka by 166 runs. Read all Ranji Trophy 2015-16 team previews here

On Day 1, Syed Mohammad spun the web around Karnataka batsmen to register his best bowling figures of seven for 44 and bundle out the title holders for a paltry 187 in 75.2 overs. He accounted for the wickets of in-form Mayank Agarwal (36), Robin Uthappa (11), CM Gautam, Karun Nair (14), Shreyas Gopal (9), Vinay Kumar and Abhimanyu Mithun during his magical day. Shishir Bhavane (65) was the only Karnataka batsman to put up a fight against the Assam tweakers. He scored his runs off 143 balls with the help of six boundaries. Leg-break bowler Amit Verma (2/16) also chipped in with two wickets against his former Ranji teammates, while pacer Krishna Das (1/22) accounted for the other, reports PTI.
Live cricket score Karnataka 77/0 | Overs 21 | BATTING: Samarth R 33(58), Mayank Agarwal 44(68): Karnataka openers have started their second innings well, posting 77 runs in the first 21 overs. Earlier, in the day they had bowled out Assam for 194 as the hosts managed a lead of just seven runs. Meanwhile, Vinay Kumar and Shreyas Gopal bagged two wickets each that laid the platform for a strong Karnataka attack that denied Assam a healthy lead in the match.
Live cricket score Assam 121/3 | Overs 45 | BATTING: Amit Verma 35(82): Sibsankar Roy is the latest batsman to get dismissed. Karun Nair bags his second wicket, as he removed Roy in the very first delivery of the 60th over for a three-ball one. With three wickets in hand, Assam still trails Karnataka by 26 runs. Now Syed Mohammed joins Amit Verma out in the middle, as Nair continues his 4th over. OUT! Sibsankar Roy LBW Karun Nair 1(3)

Live cricket score Assam 121/3 | Overs 45 | BATTING: Amit Verma 3(34), Arun Karthick 27(38): After Karun Nair dismissed set batsman Pallav Kumar Dasin the 34th over for a 107-ball 55, Assam have recovered with Arun Karthick taking the charge.  It is important for the duo to stick around for a while to ensure a compettitve total against the last two year’s champions, Karnataka.

Live cricket score Assam 21/1 | Overs 14 | BATTING: Pallavkumar Das 15, Gokul Sharma 2(9): Assam trail the Ranji champions by 166 runs at the en daf day 1 after bowling out their opponents for 187 runs, with Syed Mohammad taking an excellent seven-wicket haul. In the second innings, Karnataka skipepr Vinay Kumar ensured a good start to his, as he had bagged an early wicket for Swarupam Purkayastha for a 30-ball 3 in the seventh over. 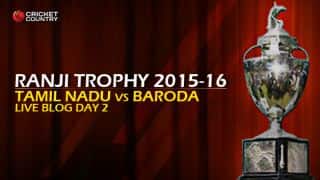 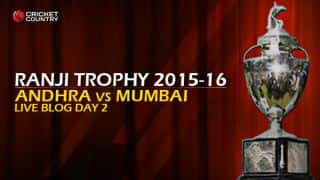