At stumps on Day two, Karnataka led Assam by 70 runs.

Hello and welcome to CricketCountry’s live coverage of Day 2 of the first Group A game of the 2015-16 Ranji Trophy between Assam and defending champions Karnataka at the Barsapara Cricket Stadium in Guwahati. At the end of Day two, Karnataka led Assam by 70 runs after bowling out the latter for 194 runs and that had allowed the home team to gain a lead of just seven runs before Karnataka openers gave a flying start to their side in their second innings. Meanwhile, Vinay Kumar and Shreyas Gopal bagged two wickets each that laid the platform for a strong Karnataka attack that denied Assam a healthy lead in the match.

Live cricket score Assam 14/0 | Overs 6 | BATTING: Pallav Kumar Das 13(19), Sibsankar Roy 1(15): Karnataka posted 394 for eight and declared. The home side now needs 388 run to win with a couple of overs today and last day tomorrow. Opener Mayank Agarwal top-scored for the Ranji champions with his 76-ball 47 and that was follwoed by vital innings from the middle-order. Sarupam Purkayastha was the highest wicket-taker for Assam with three scalps.

Live cricket score Karnataka 1391/0 | Overs 93.2 | BATTING: Suchith J 8(7), Abhimanyu Mithun 1(2): At Tea, Karnataka now lead by 371 runs with two wickets in hand. Wicketkeeper-batsman CM Gautam top-scored for them in the secon innings with 65-ball 41, Shreyas Gopal, Karun Nair and Shishir Bhavane also made crucial contributions with their scores of 41(56), 34(47) and 40(75) respectively. Meanwhile, Sarupam Purkayastha has taken three wickets from his 17 overs so far for Assam and he was well supported by Syed Mohammed who bagged two wickets.

Live cricket score Karnataka 120/1 | Overs 29 | BATTING: Samarth R 61(88), Robin Uthappa 4(8): At stumps of Day two, Karnataka led Assam by 70 runs with all 10 wickets in hand. The home side struck early on the third day, as Syed Mohammed removed set batsman Mayank Agarwal in the fifth over of the day. Robin Uthappa is the new batsman in, joined Samarth the other opener who still looks untroubled against the Assam attack. OUT! Mayank Agarwal c Amit Sinha b Syed Mohammed 47(76) 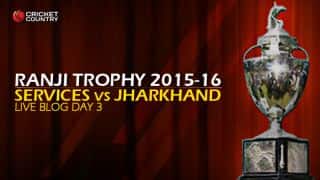