Hello and welcome to CricketCountry’s live cricket blog of the Ranji Trophy 2015-16 Group A match between Assam and Rajasthan.

Hello and welcome to CricketCountry’s live cricket blog of the Ranji Trophy 2015-16 Group A match between Assam and Rajasthan, being played at the Barsapara Cricket Stadium in Guwahati. This is a second round match in the Group A, and Assam, who are coming off an impressive win against the defending champions of the Ranji Trophy, Karnataka, will be looking to carry on their winning momentum. In this ongoing matchh versus Rajasthan, the Assam team has taken a slender lead of 26 runs in their second innings. Assam had earlier bowled out Rajasthan for a modest 186, and in reply, they were 212 for 4 wickets at the end of the second day.

Live cricket score Rajasthan 47/3 | Overs 14 | Batting: Ashok Menaria 20(22), Pramod Yadav 1 (9): Assam were always looking for a win and they couldn’t have asked for a better start. Rajasthan are three wickets down already and are still trailing by 189 runs. Another couple of wickets in a short span will dramatically increase Assam’s chance of an innings victory. As of now Rajasthan are relieved by the fact that bad light has stopped play.

Live Cricket Score Assam 360/7 | Overs 136 | Batting: Arun Karthick 133(300), Kunal Saikia 10(48): Assam’s lead has passed 175 runs and the focus now is to build a lead of at least 250 so as to give themselves a realistic chance at an innings victory. Karthick’s gritty innings has been the foundation for Assam and he’s still at the crease aiming for the 150-milestone.

Live Cricket Score Assam 311/6 | Overs 116 | Batting: Arun Karthick 107 (248), Sarupam Purkayastha 34 (85): Assam are being lead by a steady Arun Karthick who has scored a fine hundred in difficult situations. Karthick must lead the charge to try and give Assam a lead with which they can try and enforce an innings defeat on J&K. As of now the lead is 125 runs.

Live Cricket Score Assam 297/6 | Overs 110 | Batting: Arun Karthick 99 (229), Sarupam Purkayastha 30 (68): Assam’s lead has gone up to 113 runs now with Karthick one run away from a diligent hundred under tricky conditions. Sarupam Purkayastha has done a neat job in supporting Karthick.

Live Cricket Score Assam 255/6 | Overs 96 | Batting: Arun Karthick 79 (191), Sarupam Purkayastha 8 (20): Arun Karthick is still going steady at 79 and he’ll be eyeing the hundred. Meanwhile Purkayastha is still fresh at the crease having faced just 20 balls. The lead has gone up  to 70 runs.

Rajasthan had a poor performance with the bat as their batsmen got the starts but they failed to make most of the opportunity to turn them into big scores. Opening batsman Vineet Saxena was the top-scorer with 42 runs, which came off as many as 143 balls and was studded with seven boundaries.

Ashok Menaria and Rajesh Bishnoi scored 26 and 33 respectively, but they too failed to convert their starts. Menaria faced 67 balls and slammed two boundaries and a six, and Bishnoi faced 98 balls to score 33 with three boundaries and a six to his name.

In their reply, Assam too haven’t had any one getting a big score. Their opener Rishav Das fell for an eight-ball duck, whereas the other opener Pallavkumar Das scored 33 runs from 97 balls. Gokul Sharma was unfortunate to have missed out on a half-century as he fell for 46, but there was KBN Arun Karthik who slammed the only half-century of the match. Arun Karthik was unbeaten on 60 off 134 balls, studded with four boundaries and two sixes. 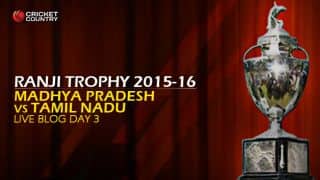 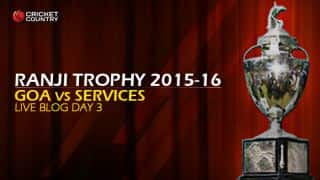