Assam face Rajasthan in the second round of the ongoing Ranji Trophy 2015-16 after gaining three vital points against the reigning champions Karnataka for taking the first innings lead. Meanwhile, Rajasthan gained their three points with a draw against Delhi in their Ranji Trophy opener game in Jaipur. Mahesh Rawat’s side required 336 runs to win and they had begun their final day with a huge task of 320 runs with eight wickets in hand in their contest against Gautam Gambhir’s boys. Since the hosts had ended the game with 186 for three from their 90 overs, it displayed the lack of consistency in the bowling attack of Delhi which includes the likes of Parvinder Awana and Pradeep Sangwan.

Live cricket score Rajasthan 113/4 | Overs 50 | Batting Dishank Yagnik 1(1), RK Bishnoi 23(65): A wicket for Assam, the star of the first game, Vineet Saxena departs. He missed out on his fifty, getting out to Syed Mohammed for 42. Rajasthan will want PR Yadav to continue batting well. PR Yadav too departs and Rajasthan are in a spot of bother now. He was run out by Arup Das. OUT! Vineet Saxena c Verma b Syed Mohammed! OUT! PR Yadav run out Arup Das 10(15)

Live cricket score Rajasthan 90/2 | Overs 42 | Batting Vineet Saxena 38 (129), RK Bishnoi 15 (47): Vineet Saxena has been batting very cautiously and Rajasthan are better for it. They have lost two wickets and it is important that someone drops anchor and glues the batting lineup together. Another wicket at this stage will be Assam’s wish, preferrably that of Vineet.

Live cricket score Rajasthan 46/1 | Overs 17 | Batting Vineet Saxena 17 (51), Ashok Menaria 18 (42): Saxena and Menaria have steadied the boat for Rajasthan following the early wicket of PI Sharma. They’ll be keen to see off the first session in this fashion and look to score runs in the following sessions. A wicket at this stage will heavily tilt momentum in Assam’s favour and they’ll be hoping to get that wicket sooner rather than later.

Live cricket score Rajasthan 14/1 | Overs 5 | Batting Vineet Saxena 2 (20), Ashok Menaria 1 (3): After the dismissal of an ominous-looking PI Sharma, Assam can breathe a sigh of relief as Vineet Saxena and Menaria have been pushed into a corner. The emphasis for Rajasthan should be to preserve wickets in the opening session of the day.

Pacer Awana, who has been Delhi’s best bet for taking wickets on placid pitches was given only 11 overs in the innings. Pawan Suyal (2/23) bowled well in his 18 overs but the rest of the attack didn’t have the required sting to trouble the batsmen.

On the other hand, Assam had a massive target of 388 to beat Karnataka, the side which hadn’t lost a Ranji Trophy match since November 2012. The hosts began the final day with 30 runs on board with a loss of one wicket. Assam who were shot out for a score of 194 in the first innings, were always playing catch up but the inexperienced team rose up to the challenge. Once Gokul Sharma departed for 55, it was Arun who took up the mantle to help Assam fight their way to a well earned draw. Karnataka missed a lot of their preferred players and will be disappointed with the way they played the game. 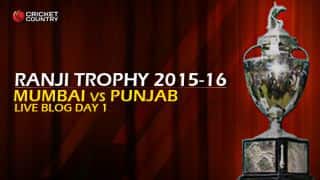